From the Azurilland Wiki, a database for the Pokémon series that anyone can contribute to
Jump to: navigation, search
Maylene (Japanese: スモモ Sumomo) is the Gym Leader at Veilstone City's Gym. Maylene holds the Cobble Badge and she uses Fighting-Type Pokémon in her Gym.

Maylene can also be challenged to a battle in the Survival zone on most days in the Platinum version. 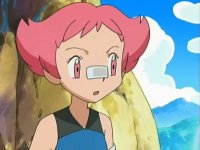 In Crossing the Battle Line! Maylene had her battle with Dawn. The plan for Dawn was to lose yet give it her all to get Maylene's confidence back. When the first battle began Maylene copied the moves her Pokémon used as she was giving the orders to do so (She said and did a Drain Punch attack just as her Meditite did). She knocked out her Buneary but lost to her Piplup. Maylene then pointed out that Dawn treated the battle like she did a contest. During the battle between Piplup and Lucario, Maylene was starting to get back in synch with her Pokémon. She beat Dawn and got her confidence back.

In A Triple Fighting Chance! She had her Gym Battle with Ash. However, this battle ended in a draw, but Maylene felt so good that she thought Ash deserved Cobble Badge. 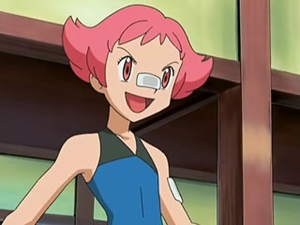 Maylene in "A Triple Fighting Chance."

"I shall admit defeat... You are much too strong."

"...OK. You win. That was a tough loss. I learned a lot from it. Please, accept this Gym Badge."
"Gee, I'm hungry... Oh, excuse me. I'm too busy to help you now. Gotta go have a lunch break. <Player>, I can't explain what it means to be strong. I don't know how much effort goes into being strong... But being with Pokémon lets us keep making the effort, doesn't it?"

"Oh, <player>! Um, are you maybe on your way to Snowpoint City? That's where I'm going, too. If I use Fly, I can get there instantly, but I'm walking for my training. I have no problem with this. I'm used to the cold because I go barefoot and lightly dressed because I think it's healthier to do that. But I should use snowgear, too. I'll be going now. Please take care!"

"Brrr... Good thing I brought snowboots...Oh, hi, <player>! Are you taking the Gym challenge now? I'm hoping to see Candice soon, but I'm staying put until I warm up again first. Oh, you should know that Candice is a user of Ice-type Pokémon. I really admire Candice. She's so studious. She wanted to practice against me to learn about the Fighting type. It's because the Ice type matches up badly against the Fighting type."

"Munch munch munch... The eatathon contest! I never dreamed of such a wonderful thing. After a strict diet of training, I can eat like a Hippowdon. The winner eats for free, too. That's just a dream come true!"