From the Azurilland Wiki, a database for the Pokémon series that anyone can contribute to
Jump to: navigation, search
← Sableye | Mawile | Aron →

[[Category:Black Pokémon]] Mawile (Japanese: クチート Kucheat) is a dual-type Steel/Fairy Pokémon. Prior to Generation VI, it was a pure Steel-type Pokémon.

Mawile are small Pokémon with a yellow and black color combination. It has a round, cute face and small red eyes. Its legs are covered by yellow flaps, with its black feet visible. Its most noticeable feature though, is its giant jaws on the back of its head. These jaws are actually a pair of horns, able to bite down on prey or enemies.

Mawile is capable of keeping its attack power at its best against enemies with the abilities Hyper Cutter and Intimidate. Hyper Cutter will prevent any decrease in its Attack stat, while Intimidate lowers the opponents Attack stat at the start of a battle. 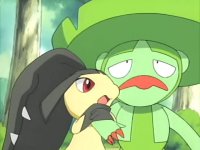 Mawile's first and only main appearance was in the Advanced Generation episode Once in a Mawile. In the episode, a Mawile fell in love with Brock's Lombre, however his Lombre did not return the feelings. Eventually, Lombre evolved into Ludicolo and then shared the same feelings toward the Mawile, but Mawile, not liking Lombre's new form, rejected it. Ludicolo later figured out that it has happened before and Mawile is always falling in and out of love.

Mawile has no forms of evolution. However, Mawile can Mega Evolve into Mega Mawile through the use of the Mawillite.

Mawile is based on the Japanese legend of the futakuchi-onna. This legend tells of a woman that had a mouth on the back of her head.