Marvelous Bridge (ワンダーブリッジ, Wonder Bridge) is located east of Route 16, and leads to Route 15. It's one of the three main bridges connecting central Unova to eastern Unova, and is not accessible before completing the main story as it's being checked.

Above the bridge, flying Pokémon come and go, casting their shadows on the ground. Wild Swannas can be caught here via these shadows along with different types of Wings.

A Magikarp salesman also appears on the bridge and is a reference to the earlier Pokémon games. He will sell a Magikarp to the player for an amount of

500. Magikarp can only be given if the player has their sixth spot in their party. 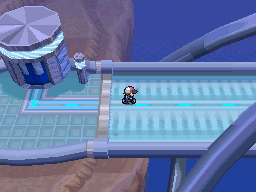 The first time you cross the bridge, the Shadow Triad appear and tell you they were responsible for Ghetsis's escape from N's Castle. After the rescue, he went off alone and commanded them not to follow. His last orders to the trio were to give you three items which he'd previously obtained; the Adamant Orb, the Lustrous Orb, and the Griseous Orb. Questioning if Ghetsis is testing you or using you, they hand the items over and bid you farewell.

After visiting Village Bridge, the player can watch the Patrat Show here to have a chance of obtaining a Big Mushroom.