From the Azurilland Wiki, a database for the Pokémon series that anyone can contribute to
Jump to: navigation, search
← Mudkip | Marshtomp | Swampert →

Marshtomp (Japanese: ヌマクロー Numakurou) is the Water/Ground-type Starter Pokémon of the Hoenn region, introduced in Generation III. Its ability is Torrent. This Pokémon's sure stance will stay sturdy even in shifting mud, and loves to burrow into dirt to sleep. Marshtomp sometimes only lives in water so beware you don't run into a swimming. Marshtomp is the second evolution of Mudkip, a Hoenn Pokémon starter.

Marshtomp (also called the mud-fish Pokémon) is a blue and orange Pokémon with orange spikes on its cheeks. Its tummy is also orange and its tail and fin on its head is a dark blue. The rest of its body is a light blue. 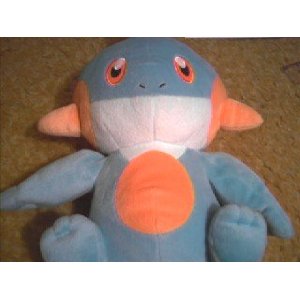 Marshtomp is a bipedal Pokémon. With two tails and the blue horn on its head, it can swim quickly in the water. With its two orange horns on left and right, it can easily find ways to escape from somewhere it's in danger. In a pinch, Marshtomps will find strength enough to crush even rocks that are bigger than themselves.

Marshtomp has the ability Torrent, which will increase the power of Water-type moves in a pinch.

In The anime[edit | edit source] 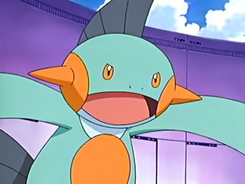 Marshtomp in the anime.

Brock's Mudkip evolved into Marshtomp during a battle with Ash. That was its first Anime Debut.

Marshtomp is the evolved form of Mudkip. Marshtomp evolves into Swampert once it reaches level 36.

Marshtomp's name comes from the words "Marsh" and "Stomp".