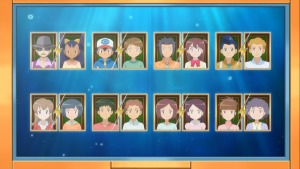 The competitors of the only known tournament

The Marine Cup Tournament is a tournament that is held aboard some of the cruise ships that travel around the Decolore Islands. The tournament is comprised of sixteen competitors and each competitor is allowed to use one Pokémon during each battle, but can use multiple Pokémon throughout the tournament. The tournament was first made known during the episode: Ciland and the Case of the Purrloin Witness!.

While there were sixteen trainers who competed in this tournament, only three were trainers were shown (even though some trainer's Pokémon were shown losing). The three trainers that are known are shown below: