From the Azurilland Wiki, a database for the Pokémon series that anyone can contribute to
Jump to: navigation, search
← Phione | Manaphy | Darkrai →

Manaphy (Japanese: マナフィ Manaphy) is a Water-type Mythical Pokémon. Born on a cold seafloor, its body is 80% water; hence, this Pokémon is easily affected by its environment. It is known as the Seafaring Pokémon because it will swim great distances to return to its birthplace. It possesses the Hydration ability; its moves includes Surf, Grass Knot, Ice Beam, Heart Swap, and Tail Glow. 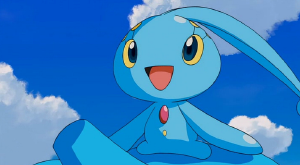 Manaphy is a small, blue, aquatic Pokémon. It has stubby feet and club-like arms that are longer than its body. Manaphy has a red gem on its chest, and a yellow dot below the gem. Manaphy has an onion-shaped head with a pair of long blue antennae, which have small spheres on the end. Manaphy’s irises are dark blue, although the outermost portions of its eyes are yellow, with two eyelashes on each eye and yellow dots on the tips. Eighty percent of Manaphy's body is made of water and is highly susceptible to its environment. One of these reactions is that when Manaphy reproduces in an ocean that's warmer than those that they are native to, the child will be a Phione as opposed to another Manaphy.

Manaphy does not evolve.

Manaphy may be based on an Undine, a water elemental or nymph in Alchemy and European folklore.