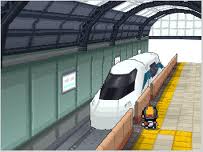 The Magnet Train is a train that runs between Saffron City, Kanto and Goldenrod City, Johto. It runs 24 hours a day, seven days a week. it allows rapid travel between the two cities, going over 340 mph.

To board the train, a rider must have a pass. To get a pass, you can get one from Copycat in Saffron City after returning her Clefairy Doll to her.

Of the two methods to get from Kanto to Johto, the Magnet Train is faster and runs more often. The other choice is S.S. Aqua. Or you may Fly to the Indigo League, where the player can fly anywhere.