From the Azurilland Wiki, a database for the Pokémon series that anyone can contribute to
Jump to: navigation, search
← Electivire | Magmortar | Togekiss → 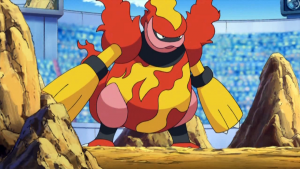 Magmortar looks a lot like Magmar, but it grew bigger, rounder and developed cannons on the ends of it's arms. It can make it's entire body catch on fire when using moves like Fire Punch. It has two huge flame-like shoulder pads that are possibly on fire. It also has a duck-like bill sort of like Magmars except Magmortar's is wider and shorter than Magmar's. Magmortar also has five black rings/streaks that are around its body. It has two on its legs, one below the neck, and two black rings on its arms. Magmortar has claws at the end of its hand cannons that most likely retract when it is battling. It has two claw toes on each foot.

Magmortar is the evolved form of Magmar and the final evolutionary form of Magby. Magmar evolves into Magmortar when it is traded while holding the item Magmarizer.