From the Azurilland Wiki, a database for the Pokémon series that anyone can contribute to
Jump to: navigation, search
← Tauros | Magikarp | Gyarados →

Magikarp (Japanese: コイキング Koikingu) is a Water-type Pokémon introduced in Generation I. The only moves that can be learned by Magikarp are Splash, Flail, and Tackle, but the move Bounce can also be learned via tutoring. 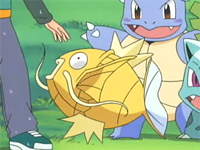 Magikarp have the ability Swift Swim, which increases Magikarp's Speed when it is raining. Despite being strong in the past, its descendants are considerably weaker. It struggles to swim against even the weakest of currents.

Magikarp evolves into Gyarados at level 20.

Magikarp made it's appearance when Team Rocket aboard a ship, S.S. Anne, in Vermillion City. James gets a Magikarp from a dealer, who cheated his money or bottle caps three times in the whole series of Pokémon Anime, in a golden Poké Ball, of which the gold color disguised the red part of the Poké Ball. It then evolves into a Gyarados, when James kicks it away after the ship sank. The newley evolved Gyarados then uses Dragon Rage to send Ash, Misty, Brock, Pikachu, and Team Rocket blasting away to an island.

Magikarp is the most common Pokémon in the waters of all the Pokémon regions. It can be found in every body of water in Kanto, Johto, Hoenn, and Sinnoh. It is considered to be the weakest Pokémon because it can only use three moves. It is a hardy Pokémon that can thrive in any body of water, no matter if the water is freshwater or saltwater. It can even thrive in polluted waters. However, if it is taken care of properly, it evolves into a magnificent Gyarados, at level 20. Until it reaches level 20, it is pretty much useless.