From the Azurilland Wiki, a database for the Pokémon series that anyone can contribute to
Jump to: navigation, search
← MS012: Pokémon - Arceus and the Jewel of Life | Pokémon Movies | MS014 →

Zoroark: Master of Illusions (Japanese: 幻影の覇者 ゾロアーク Ruler of Illusions: Zoroark) is the 13th Pokémon movie. It was released on July 10, 2010 in Japan. Acording to Pokémon.com the movie will be out in America on Februrary 5th, 2011.

Zoroark transforms into the legendary beasts. 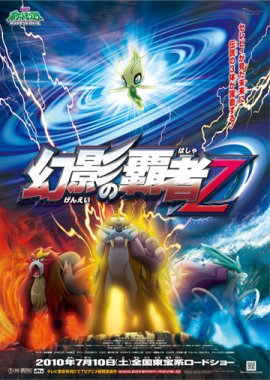 Meanwhile, Ash, Brock, and Dawn arrive in Crown City to attend the annual Pokémon Backer World Cup when they encounter the Pokémon Zorua who is looking for its mom. They allow Zorua to travel with them until the town begins to be attacked by the legendary Pokémon Raikou, Entei, and Suicune, revealed to be disguises assumed by Zorua's mom, Zoroark. Soon after, the legendary Celebi appears from 20 years in the future due to an impending disaster that befalls Crown City. It has been confirmed that the Legendary Beasts in the movie will be shiny. It has also been revealed that Zoroark is not the true villian of the movie. Kodai is the villian of the movie due to the fact that he blackmailed Zoroark into destroying Crown City. Zorua escapes from his kidnapper (Kodai) but his mother (Zoroark) does not know this. Everyone including the Pokémon of Crown City believe that Zoroark is evil. The Pokémon became hostile towards Zorua until Celebi stops them and made friends with Zorua