From the Azurilland Wiki, a database for the Pokémon series that anyone can contribute to
Jump to: navigation, search
← MS004: Pokémon 4Ever - Celebi: Voice of the Forest | Pokémon Movies | MS006: Pokémon - Jirachi: Wish Maker →

Pokémon Heroes (劇場版ポケットモンスター 水の都の護神 ラティアスとラティオス, Gekijōban Poketto Monsutā Mizu no Miyako no Mamorigami Ratiasu to Ratiosu?, lit. "Pocket Monsters the Movie: Latias and Latios, the Guardian Gods of the Water Capital") is the fifth movie in the Pokémon series, complimenting Pokémon: Master Quest (the last season of Pocket Monsters story arc in the Japanese version). The original Japanese version was released in theaters on July 13, 2002, and the English adaptation saw NY/LA theatrical release on May 16, 2003, before making its way to video and DVD in January 2004. It was distributed by Miramax Films, not Warner Bros. Pictures.

Heroes is the shortest Pokémon film, and just under 20 minutes for Camp Pikachu. In America, it is also the lowest-grossing of all the Pokémon films, and the only one not to make one million dollars at the American box office. This is likely because it was only released in 196 theatres (compared with 3,043 theatres for the first movie, and 2600+ theatres for the second and third movie) and was as much of a disastrous flop as Super Mario Bros. As a result, the films in the Advanced Generation series and beyond were direct-to-D.V.D. in the U.S. and Europe.

Although NBC currently airs the film, it recently aired on CBS Television on November 27, 2007 (because Universal released the film), being the fourth Pokémon film to air on CBS (the first three being Jirachi: Wish Maker, Pokémon: Destiny Deoxys, and Pokémon 4Ever).

Pikachu and co. rushing to the Pichu Bros.' train

The story behind this short revolves around the Pichu brothers as they attempt to find a train back to the big city. Along the way, they are helped by seven of Ash Ketchum's and Misty's Pokémon (Pikachu, Cyndaquil, Totodile, Phanpy, Corsola, Togepi, and Psyduck), and a Wynaut. Meanwhile, Meowth and Wobbuffet are hiking in the back country.

Along the way, they sit around a campfire, where the older Pichu brother, along with Wynaut, scare the younger brother with the help

of a Duskull. They also encounter a Volbeat, who guides them to a mill where they could stay the night.

The main film's setting is in the water-themed Johto city of Altomare (which means "High Sea"), based on Venice, Italy. The city is watched over by two legendary Pokémon, Latias and Latios. The story behind the two involves a Pokémon Trainer using a Kabutops and an Aerodactyl to terrorize the citizens, until the original Latios came to the city, using his powers to drown the evil Pokémon and turning the streets into canals. However, Latios died and his children were left orphans. His soul is within a special jewel, the Soul Dew, a small, blue glowing orb.

The Soul Dew is sought by Annie and Oakley, two members of Team Rocket (in the original dub they worked alone). The Soul Dew controls the Defense Mechanism of Altomare, a special device built in case of disaster. Meanwhile, Ash Ketchum, Misty, and Brock are visiting Altomare on their travels, as well as Jessie, James, and Meowth. Ash and Misty participate in the Tour de Altomare, a water chariot race. Misty wins, after Ash takes a wrong turn thanks to an invisible Latias and Latios. Ross, the former champion of the race gives the friends a tour of the city in his gondola and tells them of the city's guardians. Annie and Oakley are in the city 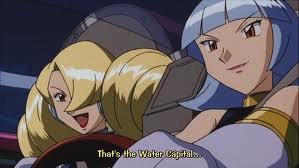 now and stalk Latias, who has disguised herself as a human girl. Latias is saved by Ash and Pikachu. Team Rocket are also in the city and decide to stalk Annie and Oakley.

The trio of heroes later visit the city's museum where they meet Lorenzo, the curator, who explains the city's legendary past and also introduces them to the Defense Mechanism of Altomare (DMA for short). Ash spies a girl, Bianca, who is identical to Latias' disguise. Ash pursues her, and then Latias in disguise, across the city, eventually discovering a beautiful hidden garden where Latias and Latios live. Lorenzo arrives to clear up all the tension between Ash, Bianca and Latios. Latias and Latios play with Ash and Pikachu, and later Lorenzo reveals to Ash the Soul Dew. However, Annie and Oakley's spy robot is watching this and later the two villains steal the Soul Dew and capture Latios. They use both to control the DMA. Latias flees to Ash for help, and later the two and Pikachu race across the gridlocked city to the museum. Oakley goes power hungry and 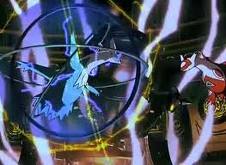 Latios' power is drained for the DMA

revives the dead evil Pokémon to capture Latias, but are killed again. The heroes arrive at the museum to find the DMA going haywire and Latios badly injured. The Soul Dew turns dark red, due to its power getting drained from the DMA. Annie goes to the Soul Dew to see what has happened, but Lorenzo warns her not to touch it in its current state. Annie ignores him, and the Soul Dew emits black lightning, and the DMA goes out of control. All the water in the city leaves suddenly and returns as a giant tidal wave. Latios and Latias use their psychic powers to destroy the tidal wave, but Latios dies in the process, due to being greatly weakened when he was used to control the Defense Mechanism. The water returns to the city, washing away Team Rocket in the process. The evil Pokémon return to their fossil states, and Annie and Oakley end up trapped inside 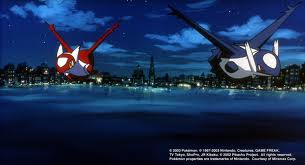 Latios and Latias rushing to ward off the tidal wave

Latios becomes a new Soul Dew and is placed as the new guardian of Altomare. Ash, Misty, and Brock head off to leave Altomare, but Bianca/Latias (it is unknown who it actually is however seeing as she doesn't speak it's quite probable that it's Latias, but it could be Bianca because it showed that Bianca's hat was in her room) stops them before they leave and hands Ash a drawing of him and Pikachu, and then she gives Ash a kiss before disappearing. As the group leave on a boat, they see three forms of two Latios and Latias in the air. The end-credits show Annie and Oakley are let out of the DMA and put in prison where they examine the possessions of Lawrence III.

The film received negative reviews upon its release, and was a box-office bomb. On Rotten Tomatoes it has a 16% "rotten" rating and at Metacritic it has a 27 out of 100 stating: Generally unfavorable reviews.