From the Azurilland Wiki, a database for the Pokémon series that anyone can contribute to
Jump to: navigation, search
← Luxio | Luxray | Budew →

Luxray (Japanese: レントラー Rentoraa) is a Electric-type Pokémon that was introduced in Generation IV.

Luxray is based on a full-grown lion with a blue coat and a black, spiked mane. Black fur covers most of its body except the backs of it legs, midsection and some of its face. It has three rings on the backs of its legs. On its rear is a spiked tuft of fur. Its tail ends in a star, similar to that of the constellation Leo the Lion. It has red scleras and yellow eyes. 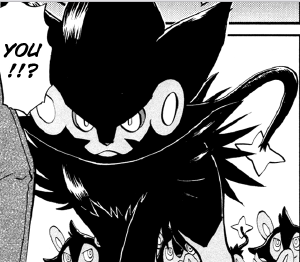 Luxray in the Pokémon Adventures Manga.

In the Pokémon Adventures Manga, Pearl owns a Luxray.

Luxray had a few appearances in The Rise of Darkrai, as one of the Pokémon playing in the garden.

Marble owns a Luxray as her partner. Sadly, It had lost its ability to use electric attacks right after it evolved. Marble's Luxray tried to stop a thief or criminal, but officer Jenny's Arcanine took care of the criminal when Luxray failed. Marble was about to pet Luxray to calm him down, but Luxray growled at her and ran off. But later, Pikachu used thunderbolt on Luxray, and it regained its ability to use electric attacks.

The Gym Leader, Volkner has a Luxray that helped restore power. Later on during Ash's final gym battle, it defeated Pikachu. However, it lost to Infernape after it activated Blaze.

Luxray evolves from Luxio as of level 30. Luxray is the final evolution of Shinx