From the Azurilland Wiki, a database for the Pokémon series that anyone can contribute to
Jump to: navigation, search
← Riolu | Lucario | Hippopotas →

[[Category:Blue Pokémon]] Lucario (Japanese: ルカリオ Rucario) is a Fighting/Steel-type Pokémon. Lucario are usually very polite and modest. Some can even talk, using Telepathy, are very powerful, and are considered by many the strongest Fighting-Type Pokémon in the games. According to legend, in the old times Lucario were teachers to humans and taught the first Martial Arts to them. 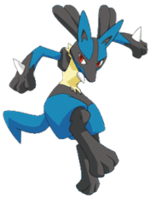 Lucario is a jackal-like Pokémon that nears four feet in height (3'11" exactly). It stands on two feet like its pre-evolved form Riolu. Lucario looks like some what dog/wolf like Pokémon. Also a kangroo in some points. Though similar in appearance to Riolu, Lucario has some notable differences. It's forepaws are black and it has large pointed spikes in place of the oval shaped bumps on Riolu. There is also a third spike in the middle of its chest. Lucario's ears and muzzle are longer in comparison to Riolu but it retains the black "mask" and red eyes. The "mask also has an added upper stripe. It also has four black appendages on the back of its head opposed to Riolu, who only had two and were previously located on the side of its head. Additionally, Lucario's torso is covered in yellow fur.

Known as the Aura Pokémon, Lucario are sensitive to a special type of energy called aura. The black appendages on the back of its head are used to detect the auras of creatures and objects around it. With its ability to sense the auras in all things around it, it can navigate and track through telepathic methods. They can also guide the waves of an aura in an offensive manner to create small balls of energy such as Aura Sphere. Lucario are also able to understand human speech; it is said that Lucario can also speak it, though only Sir Aaron's Lucario has been shown to do so and only through telepathy. Lucario have a high attack stats and is very fast. 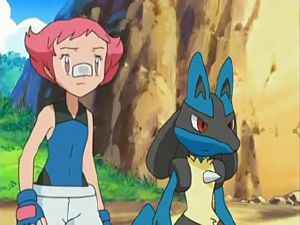 Gym Leader Maylene and her Lucario

Lucario's first appearance in an episode from the main series was in Lost Leader Strategy!, under the ownership of Maylene, the Veilstone City Gym Leader. Maylene's Lucario was used again in the next two episodes Crossing the Battle Line! and A Triple Fighting Chance!, where Maylene battled Dawn in a match and Ash in a Gym Battle. It is also The Champion's Pokémon, Cynthia. 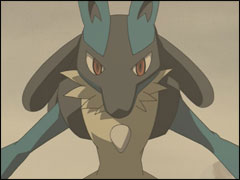 Lucario as seen in Pokémon: Lucario and the Mystery of Mew.

Lucario has a lead role in the Pokémon movie Pokémon: Lucario and the Mystery of Mew. Lucario is considered a legend from olden times to the town where he appears in front of Ash Ketchum and his friends, and mistakes Ash for his old friend Sir Aaron due to his similar aura. At one time in the past, Lucario was going to try and help Sir Aaron save a castle, but Aaron trapped him in his Aura staff which made him think that Sir Aaron had betrayed him.

Lucario is the evolved form of Riolu. Riolu evolves into Lucario by leveling up with high happiness during the day. Lucario can evolve into it's final form; Mega Lucario only devolve back to it's previous form.

Lucario is also available as an unlockable character in the game Super Smash Bros. Brawl. He is unlocked by meeting him in the Subspace Emissary, or by playing a certain amount of VS matches. Most of his attacks are imbued with aura. Ironically, he does not use any moves like Metal Claw, but he uses his down smash in a fashion similar to Dark Pulse. 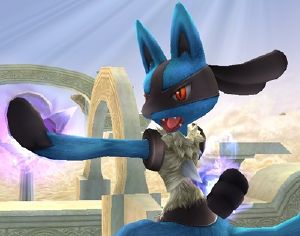 Lucario's attacks in Brawl are:

Lucario's appearance in the story mode The Subspace Emissary is fairly late in the game. Lucario meditates atop an icy peak when he is approached by Meta Knight, who has climbed the mountain alongside the Ice Climbers to reach his stolen ship the Halberd, which is approaching. Lucario challenges Meta Knight to a fight, but the two of them become friends afterwards, and Lucario joins Meta Knight in Infiltrating the Halberd, where he discovers Solid Snake hiding in a cardboard box. Meta Knight then gets ready to fight Snake, but Lucario senses that Snake is a good guy, and halts Meta Knight from attacking Snake. Lucario also senses enemies nearby and Snake quickly joins the duo.

Lucario is next seen fighting a false Peach and a false Zelda made from shadow bugs. Meta Knight, Lucario, and Snake defeat the false princesses and set the real ones free. Lucario also aids Fox, Falco, Zelda, Peach, and Snake battle Duon on the Halberd bridge while Meta Knight tries to reclaim the ship.

Lucario's canine-like appearance may be based on the Egyptian god Anubis, who, like many other Egyptian gods, possess an animal head, in his case a jackal head.

Lucario's name possibly derives from a part of the word orichalcum in Japanese, a legendary metal, when spelled backwards.