Lt. Surge is a Team Rocket executive working under Giovanni in Pokémon Adventures.

Lt. Surge heralds from America, his roots being in the United States Army.

His military training received in the Army can be used as an example to show his violent and militaristic nature. However, he is shown to have a more compassionate side, as he states the reason for joining the Pokédex Holders in the battle against the Elite Four was to protect Vermilion City from their attacking forces. He also displays concern for others, even going as far as to risk his own life to rescue Bill from Bruno's acid pool.

Lt. Surge is a seafaring man, and as such prefers to travel across the sea, as opposed to his game counterpart. During his fight with Red, he made use of his own invention, an Under Suit, which serves as a means of insulation from Zapdos' electricity. This was used in conjunction with Surge's Electrode missile launcher, whose speed and power are increased innumerably. He also used a cluster of Magneton on his shoulders, which protected Lt. Surge due to the frequent oscillations of SonicBoom. Zapdos' electrical surges are attached to Lt. Surge's Pokémon and equipment, giving them a near infinite source of energy.

He is identical to his in-game and anime counterpart. During the Gold, Silver and Crystal Chapter, his uniform is revamped to suit his militaristic tastes, resembling an army khaki uniform. It also has Poké Balls attached to his vest.

Lt. Surge's first appeared before Red on the S.S. Anne, which he was using to transport stolen Pokémon on Giovanni's command. It was this moment in which he first met the Pokédex Holder Red, who instantly tried to prevent his plans from succeeding. However, Lt. Surge was defeated after Red sank to the bottom of the ocean, promptly rescued by his recently-evolved Poli. After his defeat in Vermilion City, Lt. Surge was once again ordered by Giovanni to capture the legendary Electric-type Pokémon, Zapdos at the Power Plant. As he brought the Zapdos to Giovanni's base at Silph Co., he once again met up with Red, but was prepared to fight against him.

Lt. Surge equipped a shock-proof suit to prevent him from being affected by Zapdos' electricity, wielding a rocket-launcher which could fire out Electrode. However, the Team Rocket executive was bested by Red when he waited for Lt. Surge to utilise Zapdos' ultimate power, using Saur's Vine Whip to slice apart the power cords, ultimately resulting in his suit becoming electrified. When the amalgamation of Zapdos, Moltres and Articuno was defeated by the combined force of the three Dex Holders, Lt. Surge along with the rest of the Team Rocket executives went into hiding.

Lt. Surge teams up with Bill to fight Bruno.

When the Elite Four threatened to destroy the world, the Team Rocket executives came out of hiding, in order to quell this new threat. When the two factions arrived upon Cerise Island, they each paired up with one of the Dex Holders, as Lt. Surge teamed up with Bill, in compensation for Red's absence. The two "partners" came across Elite Four Bruno, who proceeded to easily defeat Lt. Surge and Bill on his Onix road, below a sea of acid. However, Red intervened, and the three of them managed to successfully defeat the Elite Four member. After the battle, Lt. Surge asked Giovanni whether they would rise up as Team Rocket, but he dismissed this notion, telling his executives to return to their Gyms. 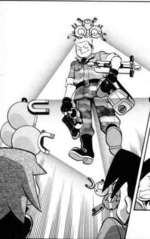 Lt. Surge appears before Gold and Silver at the Whirl Islands.

Lt. Surge relocates to the Johto region, and inadvertently captures the Pokédex Holder Crystal, who managed to prise free his submarine from the shoals of Corsola surrounding it. After letting Crystal off at Olivine City, he went to Mahogany Town to investigate the "rebirth" of Team Rocket alone, as the other executives and Giovanni were either missing or healing their injuries. Whilst at Mahogany, he came across an entity known as the Masked Man, but was defeated with relative ease, whose attacks nearly killed Lt. Surge. As he went to the Lake of Rage, he encountered Silver and Gold fighting the Masked Man, and captured the Red Gyarados after the lake was frozen over.

Lt. Surge then came across several items belonging to both Pokédex Holders, which he then gave to fellow Gym Leader Morty, who managed to discern their location using his abilities. Morty tells Lt. Surge that Gold and Silver are at the Whirl Islands, where he is successfully able to return their belongings. Lt. Surge watches the tumultuous battle between the Pokédex Holders, and Legendary Pokémon Lugia for several moments, before being called to a summit at Indigo Plateau. He is informed that there will be a tournament set up, in which the Kanto Gym Leaders will face off against their Johto counterparts, in an effort to see who is stronger. Lt. Surge is selected to fight against Morty, a battle which eventually results in a draw between both combatants.