Lorelei is a member of the Elite Four and a primary antagonist in the Yellow Chapter of Pokémon Adventures.

Lorelei is a prodigal Ice-type Pokémon user, being seen using them since early childhood.

Lorelei is a very deceptive and cunning person. She bears an insatiable grudge against humankind for treating Pokémon poorly - a trait shared by all members of the Elite Four excluding Bruno-. Lorelei also has sadistic tendencies, namely when Red was immobilized within her ice, she continued to harm him grievously. However, Lorelei also has a kinder side, when she assists Red and the other Pokédex Holders in the fight against The Three Beasts of Team Rocket, who attacked her hometown in the Sevii Islands. Lorelei is shown to have extreme adulation for Agatha, who saved her Pokémon when she was very little. Lorelei is also shown to dislike people who purposefully get in her way, as shown when she willingly singled out Green at Cerise Island, as payback for their brief confrontation in Viridian Forest. 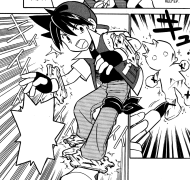 Lorelei exhibits exceeding prowess in controlling Ice-type Pokémon, being able to summon them with relative ease. She also has the ability to manifest voodoo dolls made out of ice, which can bind two people together. The ice dolls can be created by her Jynx's Ice Beam attack, and are not limited to making replicas of people. The physics behind Lorelei's voodoo doll technique is that if she makes markings on the doll with her marker pen, ice handcuffs will appear on the real bodies, limiting the individual's movements. To this effect, if any portion of the ice is broken off accidentally, for example an arm, then the arm of the person will be broken off. And ultimately, if the dolls shatter completely, then the individuals will die alongside it. Lorelei also carries with her a camera concealed within her makeup bag, in order to maintain communication with Agatha.

Lorelei is identical in physical appearance to her game counterpart.

Lorelei was sobbing at the base of a construction site, over the sick body of her Seel. She is approached by Agatha, who asks whether she needs any assistance. Agatha deduces that her Pokémon is being affected by the toxic smog exhumed by the industrial waste pollution, but alleviates the situation by having her Gastly consume the toxic poison from Dewgong's system. This has an instantaneous effect on Dewgong, as Lorelei is unable to contain her thanks. Agatha tells Lorelei that humans can cause horrible things to happen, asking whether she hates the humans for causing her Pokémon pain. She then asks Lorelei whether she would like to become her partner.

Lorelei and the rest of the Elite Four make brief appearances during the final battle between Red and Blue at the Indigo Plateau.

Lorelei and the other Elite Four team up on Red, preventing him from escaping.

Lorelei sends a letter of challenge to Red, under Bruno's name. She later interrupts Bruno's training session, informing him that the winner of the Pokémon League is a Trainer named Red, and that he is to assess Red's skill under Lance's strict instructions. Later, whilst Bruno and Red are fighting one another; Lorelei and Agatha eagerly await the outcome. However, when Bruno reveals to Red the importance of Pokémon and human connection, Lorelei brings him to his knees. Lorelei berates Bruno's nature, stating that Pokémon and human co-existence is impossible, and that the only solution is the eradication of all human beings. She reveals that the reason that they brought Red there was so that he could tell them where the missing Gym Leader Giovanni is, in order to complete their badge amplification device. 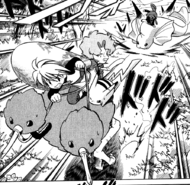 When Red attempts to escape from the Elite Four's grasp on Aero's back, Lorelei prevents his escape. She uses her Jynx to bind his legs, demanding the location of Giovanni. Lorelei realizes that Red is telling the truth, and reveals that they also brought him here to ask whether he would join their side. She states that they have been keeping an eye on him for some time now, praising his intellect. However, when Red refuses, Lorelei and the other Elite Four members quickly turn on him. Lorelei expresses her disappontment that Red did not join them, but states that a Trainer with his skill is a dangerous thing. The three Pokémon, Gastly, Hitmonlee and Jynx proceed to attack Red's Pokémon simultaneously, blinding Red. Lorelei apologizes to Red, as her Jynx forms an ice doll of the Trainer. She proceeds to mark both Red's arms and feet, as subsequent ice crystals form on those limbs.This leaves him open to attack, as Hitmonlee kicks Red in the stomach. As Red stumbles onto the ground, telling Pika to run away, Lorelei orders her Jynx to make the ice crystals on his body spread. Red is completely enveloped within Lorelei's ice mass as Pika makes its escape.

Later, Lorelei confronts both Bill and Yellow at the Viridian Forest, whereupon she tried to eliminate Pika. However, when Yellow analyses Lorelei's attacking Pokémon, she is promptly defeated due to her mind-reading ability. To this effect, Yellow was able to read her Pokémon's mind and easily defeated Lorelei's Cloyster. As Bill and Yellow attempted to make their escape, Lorelei continually pursued them across a riverbed, freezing it to stop their movements. She questions the source of Yellow's mind-reading abilities, but Yellow uses this momentary distraction to shatter the ice trapping her and Bill. As they once again attempt to escape, Lorelei tries to stop them by releasing her Pokémon, her Poké Ball is deflected by the likes of Green. This allows the trio to effect their escape, as Lorelei informs Agatha that their new target is Yellow.

File:Carr traps Lorelei and the Dex Holders.png
Lorelei, Blue and Red captured by Carr of The Three Beasts.

Once the Elite Four's plans begin unraveling, Lorelei dispatches her Shellder to attack the Celadon City Gym in an effort to prevent Erika from intervening at Cerise Island. When Green teams up with Team Rocket executive Sabrina, Lorelei binds both their hands together with Ice Doll. She begins to attack the pair with a barrage from her Cloyster and Jynx respectively, eventually resulting in Green getting knocked out. As Sabrina faces off against Lorelei alone, she mocks the Team Rocket' executive's plight. Lorelei assumes that Sabrina is attempting to take the ice doll from Cloyster, as her Venomoth repeatedly attacks its hard surface. However, Lorelei is surprised when her Cloyster faints, realising that Sabrina's true goal was to weaken it gradually with Mega Drain. Green later regains consciousness in the nick of time, rescuing Sabrina from Lorelei's attack through her Blasty's Hydro Cannon. Lorelei is surprised by Green's explanation of events, as the Pokémon trainer proceeds to use her Clefy to minimize the Ice Doll in order to steal it from Cloyster.

When Green tells her Pokémon to intentionally break apart the Ice Dolls, Lorelei proclaims that this is what she deserves for opposing her. However, Green informs Lorelei that that was her intention, as "Green's" arm dissipates, proceeding to envelop Lorelei. Instantly, Lorelei realises that she was deceived, as Ditto forms around her and Jynx. Green reveals to Lorelei that her real arm was merely hidden within her jacket, and had Ditto mimic the shape of her arm in order to fool her. Lorelei then realizes that her dream of a Pokémon paradise will go unfulfilled, as Green thoroughly apologizes, before tying her up.

Later, Lorelei protects Red and Blue when they come under attack from Carr of The Three Beasts at her homeland, Four Island. Lorelei and the Pokédex Holders find themselves constricted by Carr's mechanical device, before Sird and Orm arrive. The Three Beasts then make a retreat, as Red attempts to pursue them, much to Lorelei's chagrin. Later, the three are recuperating at a Pokémon Center, whereupon they are presented with a wanted poster displaying the pictures of Red, Blue and Green respectively.