"Welcome to Pokémon League! I am Lorelei of the Elite Four! No one can best me when it comes to icy Pokémon! Freezing moves are powerful! Your Pokémon will be at my mercy when they are frozen solid! Hahaha! Are you ready?"
— Lorelei in Red, Blue, and Yellow.

Lorelei (originally LORELAI in Red, Blue, and Yellow) is the 1st Elite Four member in the Kanto region. She specializes in using Ice-type1 Pokémon. Her strongest Pokémon is her Lapras. She lives on Four Island, and is known to have a large assortment of dolls.

Lorelei (Prima) in the anime

Lorelei appeared in the anime under the name of Prima, 4Kids stated Lorelei had to many syllables, was a minor character and a Pokémon trainer who made her debut in OI018: The Mandarin Island Miss Match. Like her game counterpart, she specialized in Ice and Water-type Pokémon. She lives on the Southern Mandarin Island, where she trains during the off season. She is a member of the Elite Four and Misty saw her as her personal hero. Ash learned many things from Prima and from the battle he lost to her, including that battles aren’t just about winning. She used a Slowbro, a Dewgong, a Cloyster and a Jynx to battle. 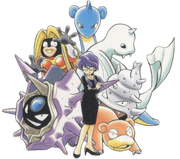 Lorelei and her team in the manga

She is a villain who helps Lance and the rest of the Elite Four members in their plans.

She only appeared In The Mandarin Island Miss Match!.