From the Azurilland Wiki, a database for the Pokémon series that anyone can contribute to
(Redirected from Legendary beasts)
Jump to: navigation, search

Not to be confused with Crown Beasts. 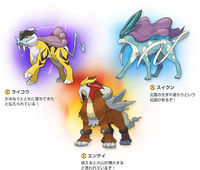 The Three Legendary Beasts consists of three Pokémon: Raikou, Suicune, and Entei. All three are said to have perished when the Burned Tower burned down because it became impossible to escape. They perished along with the tower. It is said that Ho-Oh created them from Jolteon, Flareon, and Vaporeon, respectively, after they perished in the tower.

In Johto folklore, they are said to have been resurrected by Ho-Oh when it flew over the burnt tower and brought them back to life using its power of resurrection.

Raikou, Entei, and Suicune|The Crown Beasts, shiny versions of the Legendary Beasts]] are commonly depicted as wanderers, generally choosing to stay away from people and possibly other Pokémon alike. Despite their origins, it is unknown if they are in any form of contact with each other, as they have never been depicted to actually be in contact prior to Pokémon: Phantom Champion Z. All that is certain is that they generally do not have native habitats, as they all run across the Pokémon World separately. However, they seem to appear when certain elements are introduced. Raikou usually appears in a flash of lightning, though very rarely. Suicune, though also incredibly rare, is nearly always spotted near fresh water areas in the few accounts of it having been spotted. Entei can be rarely spotted near or at volcanoes. It is widely speculated that there is more than one of each of the Legendary Beasts, due to the Pokédex entries and Professor Oak's explanation of Suicune in Celebi: Voice of the Forest. All the Legendary Beasts appeared at least once in the films: Entei in Pokémon 3 and a brief cameo in Pokémon Jirachi Wishmaker, Suicune in Pokémon 4ever and the anime, and Raikou appeared in the anime and the thirteenth Pokémon movie, Pokemon: Zoroark: Master of Illusions, with the other two in shiny form. All 3 also appeared in the game Pokémon Colosseum as shadow Pokémon that belonged to the 3 Ciphers Dakim, Lady Venus, and Ein.