From the Azurilland Wiki, a database for the Pokémon series that anyone can contribute to
Jump to: navigation, search
← Yanmega | Leafeon | Glaceon →

Leafeon (Japanese: リーフィア Riifia) is a Grass-type Pokémon, and is one of the seven evolutionary forms of Eevee.

The body of a Leafeon is slender and limber. Its tail and ears are styled to resemble torn and tattered leaves. Besides the leaf-like ears and tails, there are a multitude of smaller leaves growing from their bodies; leaves grow out from the knee joint areas on the forelegs and hind legs, its chest and its back. A larger, curled leaf grows from the middle of its forehead and is the same soft-green color of all the other leaves. It has the body that incorporates that of a fox, but shares many cat like qualities, as well as plant-like characteristics.

According to the Pokédex, Leafeon employs photosynthesis on top of its animal capabilities, as a result, it is always surrounded by fresh air.

Most of its behavior is unknown. The only trainer who took it on was Zoey, appearing only in a Japanese episode of the anime called Pokémon Diamond & Pearl. It is soon to air on American screens. In the Pokemon Platinum Pokédex, it says it does not fight. Aside from this, there is no confirmation as to the behavior of this Pokémon.

Leafeon has appeared under the ownership of Zoey. It appeared alongside Zoey's Mismagius 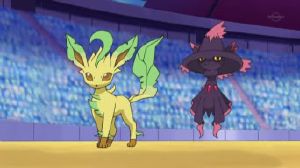 in a Grand Festival Semi Final contest battle with up against Nando's Kricketune and Loppuny. It is not known if Zoey's Leafeon evolved from an Eevee or not. Not much is known about this Pokémon.

Leafeon is the evolved form of Eevee. Eevee evolves into Leafeon at any given level, when leveled up in Eterna Forest or Pinwheel Forest near the moss covered rock.

1 Tail Whip—100% Lowers the target's Defense by one stage.

8 Sand-attack—100% Lowers the target's accuracy by one stage.

29 Synthesis -- -- Heals the user by half its max HP. Affected by weather.

57 Grasswhistle—55% Puts the target to sleep.