Leaf is a young girl with long brown hair and pale skin. She wears a white sleeveless shirt and a short red miniskirt. She also wears a white hat, white shoes and saggy, grey socks. Leaf's build is that of a small girl, probably 9-12. She is average height for a child, and very slender. 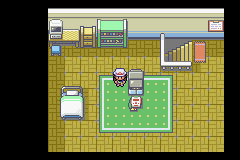 Leaf in her room, in FireRed and LeafGreen.

Leaf is a young girl from Pallet Town. The local Pokémon expert, Professor Oak, stops her from leaving town one day, saying that she needs a Pokémon for her protection. Upon doing this, Oak takes her to his lab and allows Leaf to choose one of three starter Pokémon, along with his grandson Blue.

After spending some time with her Pokémon, and returning to Pallet Town, Professor Oak gives both her and Blue a Pokédex so that they can fill it with information on Pokémon. This is the start of Leaf's Pokémon journey throughout the Kanto region.

Leaf appears in the Pokémon Special Manga, as the character Green.

Leaf apparently was supposed to be in the original, Japanese Red and Green versions of the game. In Nintendo's Official Guidebook, Leaf appears alongside Red and the rival Blue. There was even some concept art for her character.

The reason she was left out of the games is unknown. It is possible that because of the limits in the game card, they left her out since they could not feature optional characters. Though it could have been possible to feature each character in a different version. But later they recycled her design into Leaf's Fire Red & Leaf Green design.