Lawrence III is the main antagonist that appeared in Pokémon the Movie 2000: The Power of One. He calls himself a "collector", but many see him as a Pokémon poacher more then a collector, although it seems that he didn't have any Pokémon of his own before capturing the Legendary Birds. He travels in a gigantic airship that houses his collection of artifacts, although his most prized treasure is his Ancient Mew card, which was also the first object in his collection. His goal is to capture Lugia and add it to his collection. By the end of the movie, he finds his Mew card and mutters "How it all began, and how it will begin all over again", implying that he will try again to catch Legendary Pokemon to his collection. He hasn't been heard of again although at the credits of Pokemon Heroes, Annie and Oakley were seen looking at a picture of him.

Lawrence III is in his late 30 or early 40. He has green hair with two lopes coming down either sides. He has purple eyes and is rather tall. 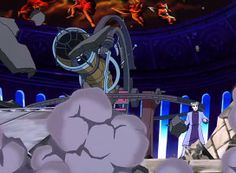