From the Azurilland Wiki, a database for the Pokémon series that anyone can contribute to
Jump to: navigation, search
← Latias | Latios | Kyogre →

Latios looks similar to Latias, though it is blue and a bit larger; it is also similar to Lugia. Latios has an upside-down, white teardrop shape in the center of its blue face. In the middle of his chest, Latios has a red triangle, much like Latias', whose is blue, showing in some way they are related. In the movie Pokémon Heroes, Latios and Latias both serve as guardians. Latios also appeared in Super Smash Bros. Brawl in a Poké Ball. When Latios is released it will use the move Steel Wing with Latias. Latias is Latios' sister.

Latios comes with the ability Levitate, which causes Ground-type moves to always miss. Latios is able to fold in his arms and fly at the speed of a jet. He can also make foes see images he has seen or what he imagines in his head. He can understand human speech. Even if he is hiding, Latios can detect the locations and emotions of others using telepathy. Latios can also refract light around him to make him appear invisible unless the light strikes him just right.

In the movie Pokémon Heroes Latias and Latios also had the ability "Sight Sharing" which allowed Latias and people around her to see exactly what Latios is seeing and vice versa.

Latios is the only known Pokémon that learns Luster Purge. 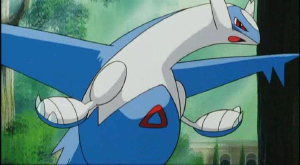 Latios in the anime

Latios first debuted with his sister Latias in Pokémon Heroes. Annie and Oakley captured Latios and used his DNA along with the stolen Soul Dew to power the Defense Mechanism in the museum of Alto Mare. Latios ended up sacrificing himself to save Alto Mare from an enormous tidal wave.

A Latios owned by Tobias was used in DP189 in the semi-finals of the Sinnoh League, where he defeated Ash's Sceptile and Swellow and tied with Pikachu.

Latios does not evolve.