From the Azurilland Wiki, a database for the Pokémon series that anyone can contribute to
Jump to: navigation, search
← Registeel | Latias | Latios →

Latias (Japanese: ラティアス Ratiasu) is a Dragon/Psychic-type Legendary Pokémon introduced in Generation III. She, along with a few others, is one of the few Legendary Pokémon to have a gender, and will always be female. 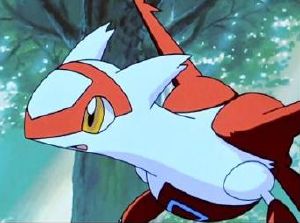 Latias is a dragon-like Pokémon with features resembling a jet plane. The upper portion of her body is mainly white, while the lower portion is red. She has triangular ears, and a patch of red with a smaller patch of white, on her face. On her back are two jet plane-like wings, and lower down are two fins or flaps for feet. She has red and white arms, that are able to be retracted into her body. On Latias' chest is a light blue triangle symbol. It has large yellow eyes too.

Latias has the ability Levitate. This ability allows her to be immune to ground-type attacks, as well as Toxic Spikes.

Latias is a highly intelligent Pokémon, able to understand human speech and communicate telepathically. Using a glass-like down, Latias can reflect light to alter her appearance. Latias is also the only known Pokémon who is able to learn the move Mist Ball.

Latias had a large role in the movie Pokémon Heroes. In the movie Ash and company help Latias to save her brother, Latios, from Team Rocket agents Annie and Oakley. This Latias also took a special liking to Ash, going so far as to give him a kiss at the end while in human form(it is unknown if she or Bianca kissed him). Pokémon Heroes is a Generation II movie.

A different Latias appeared under the ownership of Nurse Joy who used the legendary Pokemon to battle and defeat Forrest's Rhyperior.

Latias does not evolve.

You are awoken by a loud noise. You go outside to investigate, only to get rammed by Latios. The next morning, you go to Town Square where purple Kecleon is raising a fuss. All his TMs were robbed overnight. You go to the dungeon where Latios is keeping the TMs. After you defeat Latios, he comes back with you to return the TMs and to say he's sorry. When you get back to town Latios reveals the battle with you put a lot of damage on him. Purple Kecleon tries to punish him for stealing the TMs. Alakazam stops him and lets Latios explain why he would steal the TMs. Latios explains that he and his younger and beloved sister, 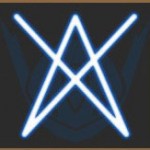 Latias, were having a flight one day, when Latias got hit by a meteorite on her wing, and she fell into a giant chasm. Latios explains that he tried to save her, but the dungeon proved to be to much for him. So he stole the TMs to try and get stronger. Purple Kecleon stops being angry and understands why he did what he did, and forgives Latios. You then go on a mission to rescue Latias, since Latios is still in bad shape and must rest in town. Once you make it through the dungeon, Latias hears your footsteps as you approach. She tells you that her wing still hurts, but she's okay. You and Latias warp back to the town. Latias and Latios, happy to be together again, cross their necks in happiness. Green Kecleon sobs of seeing so much happiness. As thanks, they ask if they can join your team.

In the game if you choose a girl, (A.K.A. Summer) it will open up that the Pokemon Pinchers are after Latias. One of the Guardian Signs is a sign to call Latias. Thus your transportation for the game, besides Staraptor.