From the Azurilland Wiki, a database for the Pokémon series that anyone can contribute to
Jump to: navigation, search
← Latios | Kyogre | Groudon →

Kyogre (Japanese: カイオーガ Kaiouga) is a Water-type Legendary Pokémon introduced in Generation III. It is the Version Mascot of Pokémon Sapphire.

It seems to resemble something like a big dark blue whale or orca. It has two big fins or "wings", each ending with four square-shaped "claws." It has a deep blue body and a white chin area with two spikes protruding under it. Above each eye are two spots. It has markings on its wings which sort of resemble the letter A with a circle on the top. It also has two small dorsal fins on its back with two stripes running horizontally below the fins. The tail seems tattered with four trails, the inner smaller than the outer. It also has a mouth full of rarely seen sharp triangular teeth.

Kyogre appeared in the anime in Episode 373: Gaining Groudon!, and Episode 374: The Scuffle Of Legends!, debuting with Groudon as well. Team Magma and Team Aqua were competing to gain both legendaries. Team Aqua, as it turned out, tricked Magma leader, Maxie by taking Kyogre even after they had Groudon. Then soon things started to get hectic when Archie, Team Aqua leader, seized Kyogre from Team Magma, but it got out of control and possessed him. Then it started to become chaotic as Kyogre was rampaging throughout the ocean. Until Ash's Pikachu, taken over by the Blue Orb, shocked Groudon's cargo container and released Groudon to fight against Kyogre. It turned out that Groudon was the nice one, using the Blue Orb to make Pikachu release it to help Ash and friends.

However, Kyogre is not an evil Pokémon. It saves Ash and Pikachu from drowning in the sea by taking Ash upon its back and it rises to the surface. After that the orbs were placed into rest and all was well again. Kyogre also made an appearance in the ninth Pokémon movie, Pokémon Ranger and the Temple of the Sea, where it was kind of like Manaphy's "steed."

Kyogre does not evolve.

Kyogre is obtainable in Sapphire, Emerald, and HeartGold through normal means. Trading a Kyogre into SoulSilver and showing both it and Groudon to Professor Oak allows the player to catch Rayquaza. 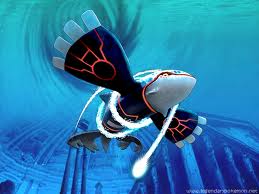 Kyogre's name originates from Kai, which means ocean. Ogres are mythical beasts, but it's unlikely the reason Kyogre's name ends in ogre. It's probably because it's a big beast that which the suffix ogre makes sense. Without the "Ogre" part, it spells out Kaiō, which means King of the Sea. Also, Kaiō is the first four letters of the word Kaiōsei which means Neptune, the Roman version of the Greek god of the sea, Poseidon.