Koya is a character of the manga Pokémon Diamond and Pearl: Adventure!. He is a young member of the 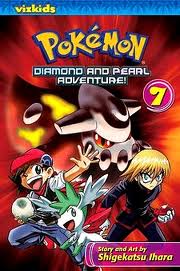 Koya appears on the cover of Volume 7 along with Hareta, his egg, Shaymin, and Heatran.

International Police and a cold and calculating tactician.

Koya has blond hair, a black vest and black pants on. His clothes resemble your rival's from Pokemon Gold and Silver and Pokemon HeartGold and SoulSilver. Koya is usually seen frowning.

Hareta first meets Koya in the stands of the Sinnoh Tournament. Hareta attempts to touch Koya's Absol, but gets smacked by it's owner. Hareta then tries to battle Koya in the stands with his Empoleon, but is stopped by Mitsumi. Before he leaves, Koya says that Hareta is an inexperienced trainer. Jun then battles Koya in the first round, but his Staraptor, Torterra, and Dragonite are all one hit K-Oed by Koya's Absol. Later, when Hareta is battling Flint, he sees Koya and gets pumped up. After defeating Flint, Koya defeats a man and his Ambipom in the second round. Hareta defeats a girl's Heracross. Before the Semi-Finals, Mitsumi spots Koya talking to his...briefcase?! After the conversation, Koya leaves for his battle. Hareta and Koya must face each other in the Semi-Finals, and Hareta starts off with Luxio while Koya has Absol. After some fierce blows, Luxio evolves into Luxary and now must face Koya's Metagross. Luxary is defeated and Hareta's Regigigas is sent out. After beating Metagross, Hareta says that this battle is fun. Koya gets mad and sends out his Mamoswine, which destroys Regigigas with one Take Down. Koya then tells a story about his childhood. He had a Growlithe who never gave up. They always fought for fun, but one day, Koya challenged a Gyarados and badly lost. When Growlithe was taken to the doctor, it had lost it's fighting spirit. Koya then abbandoned it and joined the Police. The battle resumes after that, and Hareta's Empoleon defeats Mamoswine before some Team Galactic Grunts attack the stadium. Turns out they're now lead by Charon, and they go by Neo Team Galactic. They place a bomb in the stadium, and working together with Hareta, Cynthia, Flint, Jun and others, Koya destroys the bomb. Koya then has to leave to chase Hareta's Dad, a so called "criminal".