Koga is a Team Rocket Executive working under Giovanni in Pokémon Adventures.

Koga is Fuchsia City's Gym Leader, and he specialises in Poison-type Pokémon and is a veritable expert at ninjutsu. His daughter, Janine, took over the gym in the stead of her father, who became a member of the Johto Elite Four.

Koga's personality is first depicted to be cruel and merciless, as shown during his battle against Blue and Red in Pokémon Tower, as he uses Articuno to nearly freeze the pair to death. However, after their conflict, Koga returns once more to face off against the Elite Four member Agatha, teaming up with his nemesis, Blue to defeat her, and displays more admirable characteristics such as bravery and concern for others.

He can use modified Poké Balls, which can be thrown as Shuriken.

Koga first appears at Mt. Moon, where he is fervently searching for the Moon Stones to bring back to Team Rocket. He is stopped by an untimely appearance by Red and Misty, who thwart his operation. Koga then makes an appearance at the Pokémon Tower in Lavender Town, planning to use his Gastly to revive the deceased Pokémon corpses stored there. However, Red and Blue form an unlikely alliance against him, but experience difficulty in the battle, primarily due to his Arbok's ability to regenerate and control separated body parts. After this, Koga brings Articuno to Saffron City under Giovanni's orders, who then proceeds to combine the three legendary brids together into an amalgamation of the three. As Red and Blue oppose his plans at Silph Co., he nearly kills them by using Articuno to freeze them to death. However, Blue manages to defeat him by using his Charizard's flames to melt Articuno's ice.

Koga and the other Team Rocket executives team up with the Pokédex Holders, in order to prevent the Elite Four's plans from culminating on Cerise Island. Koga joins forces with Blue, preparing to face off against Elite Four Agatha, which proves to be a perfect match for both opponents. As they face off against each other with their Pokémon, Blue is temporarily paralysed by Haunter's Lick. In response to this, Koga throws a multitude of shuriken at the surrounding area, which Agatha believes to be a fruitless task, and that he is nearing the end. However, Koga reveals that they were Poké Balls containing a potent Paralyz Heal, which reached Blue, healing him from the ailment. The two formulate a new plan, with Koga instructing his Golbat to use Leech Life on himself, which results in Agatha's Arbok to not be able to change the pattern on its crest. As Agatha is seemingly defeated by Koga's Confusion, the two proceed to try and navigate their way through the labyrinthine pathways underneath Cerise Island. 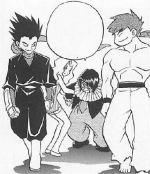 However, Agatha was merely manipulating Koga through her Gengar. She uses her Gengar to manifest as their shadows, proceeding to drain the life from Koga and Blue. However, they saw through her trickery and managed to defeat her, just as Cerise Island began to collapse. As Blue supports him through the journey, Koga uses his Muk to protect his body. During the collapse of Cerise Island, Koga is saved from being crushed by falling rocks by Bruno. After the Cerise Island incident ends, he leaves Janine in charge of the Fuchsia Gym and promptly disappears for a short period of time. Koga accepts Bruno's offer to train him as gratitude for saving him from being killed on Cerise island.

Following the final battle at Ilex Forest Koga invites two other members of a former criminal organisation, Will and Karen to join the new Elite Four.

Koga reappears alongside his teammates at Johto's Pokéathlon Dome, announcing the reformation of the Johto Elite Four.