"Fwahahahaha! I am Koga of the Elite Four. I live in shadows--a ninja! My intricate style will confound and destroy you! Confusion, sleep, poison... Prepare to be the victim of my sinister techniques! Fwahahahaha! Pokémon are not merely about brute force--you shall see soon enough!"
— Koga, Pokémon HeartGold and SoulSilver.

Koga (キョウ Kyō) served as the Gym Leader at the Fuchsia City Gym. Two years later, during the Generation II games, Koga became a member of the Elite Four and his daughter, Janine took over the gym and used poison Pokémon as well.

He specializes in Poison-type Pokémon, and as a Gym Leader gave out the Soul Badge for trainers that could defeat him.

Koga first appeared in the Generation I games as the Fuchsia City Gym Leader. His gym was constructed with an array of invisible walls, fashioned into a maze. This forces the player to walk through the maze fighting Gym members, with the destination in the middle where Koga awaits.

Later, in the Generation II games, Koga has been promoted to Elite Four status. With the absence of a Gym Leader at Fuchsia Gym, Koga leaves the Gym under his daughter's care, Janine, making her the new Gym Leader.

In the remakes of the original games, Pokémon FireRed and LeafGreen, Koga is once again a Gym Leader, as it takes place during the same time period. The only difference is the level of his Weezing, and his updated appearance.

Koga appeared in the episode The Ninja Poké-Showdown, where Ash and company stumble across his Gym. Not appearing until later in the episode, Ash can only find a plethora hidden traps within the gym, and then later Koga's sister Aya. After the appearance of Koga, and a small incident with Team Rocket, Koga and Ash finally have their battle, uninterrupted.

The two have a one-on-one battle, with Ash using his Charmander, and Koga using his Golbat. Initially having some trouble, Charmander was unable to hit the Golbat, but after using Fire Spin, Ash was the victor. Upon leaving Koga rewarded Ash with the Soul Badge. 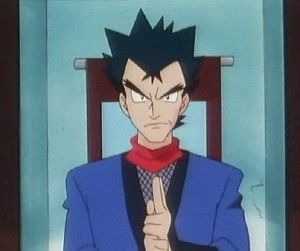 Screenshot of Koga in the anime.

In the Pokémon Adventures Koga is an executive for Team Rocket and along with Sabrina and Lt. Surge he fights Red to prevent him from interfering, but, as usual, this results in failure.

It was shown that he has a daughter who worried about him because he wasn't seen for a long time.