From the Azurilland Wiki, a database for the Pokémon series that anyone can contribute to
Jump to: navigation, search
← Omastar | Kabuto | Kabutops →

Kabuto (Japanese: カブト Kabuto) is a Rock/Water-type Fossil Pokémon introduced in Generation I that can only be obtained by resurrecting it from a Dome Fossil.

While concealed, Kabuto leaves exposed only its hard shell, which protects it from predators, while the small black eyes on its back allow it to continue monitoring its surroundings. If it is flipped upside down, it becomes helpless and defenseless as it is unable to flip over on its own. It may be based of a Trilobite.

Kabuto evolves into Kabutops at level 40. 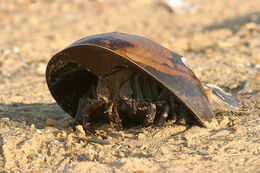 The real-world equivalent of Kabuto.