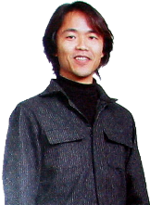 Junichi Masuda (増田順一 Masuda Jun'ichi) is notably known for being the Director of the Board at Gamefreak, the company which produces each Pokémon game. He is also credited with composing many of the soundtracks featured in each Pokémon version.

Masuda has an extensive history working with Pokémon soundtracks and location songs, and the notable soundtracks he has affiliated himself with are listed below.