Jubilife City is the biggest city in Sinnoh. It's the closest city to Twinleaf Town (the player's hometown). Features in the city include the GTS, The Trainer School, the headquarters of the Pokétch Company, and the Jubilife TV Station. The city does not have a gym.

The updated version of Jubilife city

To the west of the city is Canalave City, to the east is Oreburgh City, to the south is Sandgem Town and to the north is Floraroma Town. The GTS in Pokémon Platinum is a lot bigger than the Diamond and Pearl version. You can have up to 21 people in the GTS in the Platinum version.

The Trainers below are found in the Pokémon Trainer School. 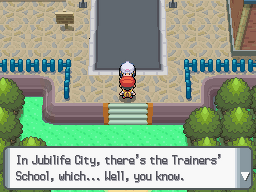 The first time you visit here, Dawn/Lucas will appear and talk to you that your friend is currently at the Pokémon Trainer School. Head towards there to pass him the Parcel his Mum have requested. There is a spare Town Map in his parcel and decided to gives you the extra.

Get a Pokétch[edit | edit source] 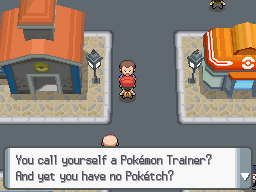 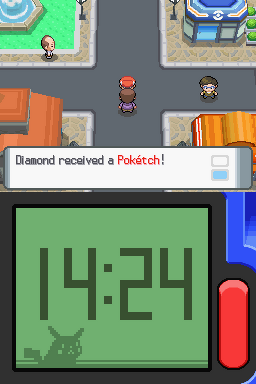 Get an Old Rod[edit | edit source]

Head west of Jubilife City and into a building. Talk to the fisherman there and he will give you an Old Rod if you replied "Yes". 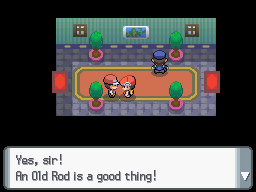 Get a Quick Claw[edit | edit source]

Head to a condominium and chat with the woman there. She will give you a Quick Claw, a Held item that allows your Pokémon to attack first.

Soon after you win yourself a badge, two Team Galactic members appear at Jubilife City harassing and trying to bully Professor Rowan and your other rival into coming with them. Together with Dawn/Lucas, you battle them in your first tag battle with another Trainer.

After winning the battle, Team Galactic retreats and Professor Rowan and his grandkid will tell you that 90% of the Pokémon is tied with evolution. Then they walked off. A man then walks towards you. He is a representative from the Jublife TV. He will give you a Fashion Case that allows you to dress up your Pokémon. After this battle, you can now access to the Jubilife TV Station!

Here at the GTS, you can log on (using wi-fi) and trade with other trainers who deposited their Pokémon. On the menu there are three choices: Deposit Pokémon, Seek Pokémon, and Exit. Deposit Pokémon is a feature that allows you to deposit Pokémon on the GTS asking for a specific Pokémon. Other trainers can trade the Pokémon you asked for. When you seek Pokémon, you do the opposite, you trade for Pokémon that other people deposited. Exit seems pretty straight forward so hope you have fun on the GTS.

This building is located next to the Pokémon Center. There is a blackboard listing status conditions and their effects. The teacher appears to be an Ace Trainer. Many students around will also give you tips.

There are two school kids that are willing to battle with you. Their Pokémon information are found here. After you have battle them, talk to the boy again and he will give you TM10 Hidden Power.

The Pokétch company is where they make Pokétch applications (apps for short). Every time you complete an event, the president will hand you an app. There are many other people who also give you apps. There are three floors in the warehouse. If you talk to the people inside, they'll give you tips.

After you receive certain amount of badges, come back to the company and meet the President. Every two badges you collect, he will give you one applications. So he can give you a maximum of four applications.

There is also an elevator you can take up to the floors you want. There are many reporters out there who'll interview you and you might end up on TV (in the game).