From the Azurilland Wiki, a database for the Pokémon series that anyone can contribute to
Jump to: navigation, search
← Ninetales | Jigglypuff | Wigglytuff →

Jigglypuff (Japanese: プリン Purin) is a Normal/Fairy-type Pokémon. Prior to Generation VI, it was a pure Normal-type Pokémon.

Jigglypuff is among the most recognizable Pokémon, due to its singing and pink, fat, squirrel-like appearance being considered very cute. Jigglypuff is voiced by Rachael Lillis in the English version of the anime show and in games, and by Mika Kanai in Japanese counterparts.

Jigglypuff is a small pink Pokémon with large eyes and ears.

Jigglypuff is a balloon type Pokémon. Its body is globular, pink, fluffy, cuddly, and accented with stubby appendages, a tiny tuft of a single curl of hair, and enormous blue eyes, featuring green eyes for its alternate color version. Its skin is rubbery and stretchy. Jigglypuff can inflate its body like a balloon, or flatten its body, much like fellow Nintendo character Kirby. An exact limit to the size it can grow to in this manner is unknown. Jigglypuff evolves from Igglybuff with a high level of friendship, and to Wigglytuff when exposed to a Moon Stone. In super Smash Bros. Brawl, its Final Smash allows it to grow constantly, knocking other players off the screen. After some time, Jigglypuff shrinks to her normal size. In the anime, Jigglypuff sang a lullaby to make people and Pokémon go to sleep.

Jigglypuff is the evolved form of Igglybuff. It also evolves into Wigglytuff by use of a Moon Stone.

In the Pokémon anime series, Jigglypuff is a recurring character who aspires to be a great singer after the inspiration of Ash Ketchum and company. Unfortunately, every potential audience falls asleep before the song finishes. Jigglypuff does not usually choose an appropriate time to sing and has been a hazard many times, especially on moving vehicles. Because of this, Ash Ketchum and his companions often find themselves running away from Jigglypuff, who obviously isn't pleased with the fact that everyone falls asleep whenever it sings. It keeps with it a black marker, its "microphone," and uses it to scribble on anyone who dares to fall asleep while it's performing (after it inflates itself in anger with a distinctive "honk" sound). Only on two occasions has Jigglypuff believed that anyone had heard its song to the end: in the first, Jigglypuff realizes that Misty's Psyduck was sleeping with its eyes open, and in the second, a Whismur (a Pokémon with "soundproof" ability and therefore immune to sound-based Pokémon moves) had heard the song the first time, but on the second time it was tired so it fell asleep anyway. There was once when Jigglypuff sang to two gigantic Pokémon battling each other, but these two Pokémon did not fall asleep, and instead Jigglypuff was knocked away by the energy of their battle. Another Jigglypuff (In the episode Rough, Tough, Jigglypuff) had a Loudred (Whismur's evolved form and therefore also bearing the "soundproof" ability) listen to its song, but it didn't care as this Jigglypuff was using Sing for an attack. there is also a jumbo Jigglypuff that appeared in IL072: The Ancient Puzzle of Pokemopolis it called bigglybuff or jigglyjiant. it put the giant Gengar and the giant Alakazam to sleep but it was angry and painted on there faces with the paint brush in the bell it came out of. it has markings on it and it is very big 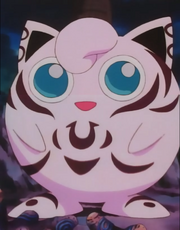 Jigglypuff appears to be based on a balloon.

The name Jigglypuff is a portmanteau of the words jiggly, referring to its motion, and puff, referring to its buoyancy. Its Japanese name, Purin, probably derives from Purin (プリン, Purin?), the Japanese word for custard pudding. It may also come from a combination of many Japanese words; fukureru (膨れる, fukureru?), meaning to swell or expand; fukafukashita (ふかふかした, fukafukashita?), meaning soft or fluffy; fūsen (風船, fūsen?), meaning balloon; and mari (鞠, mari?), meaning ball. Essentially, it could be taken to mean "a soft and fluffy ball," "a swelling balloon," or a combination of the two.