Jessie is a member of Team Rocket. She tends to be a drama queen and has a diabolical temper. She works with James and Meowth. Their main goal is to steal Pokémon, preferably Ash Ketchum's Pikachu. She and James have rivals- Butch and Cassidy. Jessie's name is sometimes spelled as Jesse, as her name comes from the famous outlaw, Jesse James. 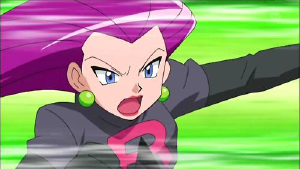 Jessie was a poor girl with a cold past whose mother, Miyamoto, disappeared in an avalanche on an expedition of Team Rocket to capture the legendary Pokémon Mew, where unlike her daughter, she was very high ranked. As a child, her foster mother (her real mother in the dub) cooked with a "base ingredient," the snow. So, Jessie enjoys eating snow. She would even go out of her way to get some and make some of her mother's old "recipes." She met her mother one last time before she left her in Best Wishes to look for a Celebi. Now Jessie is torn up that her mom leaves for rules. In Best Wishes, she also loses some weight due to her promotion. 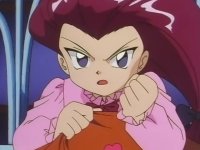 Jessie as a child

Not much is known about Jessie's past. In the chapter nine of the first season, Jessie talks about her bad memories of study in the Pokémon Technical Institute. At the time, she already knew James; they studied together for "a big test",but after getting the lowest grades in the school's history, they joined a bike gang in Sunny Town episodes later. Jessie went to Team Rocket after failing in her attempt to become a Pokémon nurse, partly due to the fact that the Pokémon nursing school she attended was only for Pokémon who wanted to be nurses (in this case, the Chansey), not for people. But, she did not know that until graduation day.

More recently, it was learned that she was studying dance at a school with two friends, letting go of one of her first youthful loves in order to pursue her dream of being a star. However, she failed the test of dance and regrets not having accepted the invitation to accompany the boy to compete in Pokémon Contests. Not much is known of her former love life, but she said that has never been very lucky in love as her grooms to have treated her unfairly and/or abandoned her. She is later paired up with James, a rebellious rich-boy who doesn't want to follow his family wishes, and Meowth, a fast talking Pokémon who has dreams of being on top.

As of her, James' and Meowth's promotion and transfer to Unova, Jessie has become a highly skilled stealth artist, an excellent athlete and is often successful in many missions with her team mates to the point of the trio becoming a serious enemy for Ash and co. The trio were key in Team Rocket's Meteonite plan, taking order directly from Giovanni himself as well as his secretary. Jessie and her team-mates worked together with Pierce and met Doctor Zager.

Once the plan culminated, Jessie and her team-mates were asked to be as they please in Unova, so they continued working hard to do Team Rocket good and now work closely with Zager. Ash has also become less important to them but they will still antagonize him if he interferes in their plans.

In the games, Jessie and James are supposed to have the same age as Ash. However, according to a special CD available only in Japan, Jessie and James are in their 20's in the second episode of Anime. In an episode of the season, Master Quest, reveals an old woman who is 120 years old Jessie. Jessie amazed replica which is 10 times her age. As Jessie obviously has more than 12 years, Meowth asked her where she learned mathematics. She has a long going rivalry with fellow Team Rocket Member Cassidy.

In Hoenn, Jessie began to compete as a Pokémon Coordinator, and although she was not successful, she continued to participate in each Pokémon Contest she could. Initially, she cheated, using technological assistance and intervention of James and Meowth, but then began to compete fairly. She often borrowed Pokémon from James for the contests, and has repeatedly used Meowth as one of her Pokémon. Despite losing in all contests in which she participated in Kanto and Hoenn, in the Sinnoh region, she won three ribbons herself, using her Dustox, Yanmega and Seviper, and obtained a ribbon after James won a contest in her place, as well as receiving one from Princess Salvia after she lost to her. Jessie then became eligible to participate in the Sinnoh Grand Festival, and made it to the semi-finals, but lost to Dawn. She also participated in Summer Camp Pokémon and got a diploma/credit for having studied (she was disguised Jessilina). Jessie was the leader of her ragtag group, and she was not afraid to show it. After the Sinnoh Grand Festival, Jessie abandoned the Jessilina alias.

Jessie has a strong relationship with their Pokémon and wants, even if they seem evil. She had a great friendship with a Blissey who she knew long ago, Jessie never wanted to take this Pokémon with her because she knew it would not be happy living as she lives (because that Blissey is very affectionate and friendly).

Her hair has been cut / eaten on several occasions and this is something that saddens and gets her very upset. Jessie is not very smart to say, so if in doubt goes to James to have it cleared. Said to be bad but sometimes shows a girl with a good heart. Jessie, James and Meowth dream to catch Ash's Pikachu since its first appearance, and although rarely they succeed they never give it to their boss Giovanni, with which they always dreamed of doing. She, James and Meowth are fired multiple times into the sky out of sight for some Pokémon attacks, even by accident. Jessie has had various Pokémon throughout the anime. Prior to when Ash starts his journey, Jessie recieved an Ekans for her birthday and used it even when it evolved into an Arbok. She also had a Likitung, but she didn't use it much. In the Johto region, Jessie accidently traded her Likitung for a Wobuffet, which she admits could have been the worst mistake of her life. After the Hoenn region, Jessie released Arbok and tried to release Wobuffet, but Wobuffet snuck back in his Poké Ball and has been with the group ever since. In the Sinnoh region, she captured a Yanma (which later evolved into a Yanmega).