"Thank you for your help at the Lighthouse... But this is different. Please allow me to introduce myself. I'm Jasmine, a Gym Leader. I use the...clang! Steel type! ...Do you know about the Steel type? They are very hard, cold, sharp, and really strong! Um... I'm not lying."
— -Jasmine, Pokemon HeartGold and SoulSilver

Jasmine (ミカン Mikan) makes two appearances in Gen. II and Gen. IV. In Gen. II, she is the Gym Leader of Olivine City. Defeating her will give you the Mineral Badge. In Gen. IV, she appears when you reach the beach at Sunyshore City and will give you the HM08 Waterfall.

In addition, if you make it to a Master Rank Pokémon Contests, you will go up against her and her Steelix.

She does amazing in the both the Dress up and Dance categories, but faulters in the performance of moves. Jasmine appears in Diamond, Pearl, and Platinum in Sunyshore City.

In the Anime she was voiced by Tara Sands back in Johto League Champions and Pokémon Master Quest, and she was voiced by Alyson Leigh Rosenfeld in Sinnoh League Victors, much to fans dismay in the hopes that Tara would voice her again.

She first appeared in Fight For the Light, where she stopped a battle between Ash and her apprentice Janina. She scolded her for using water-proof wax on her Onix and sent her away. She then declined Ash's offer for a Gym Battle and with good reason: Sparkle, the Ampharos at the lighthouse, is sick and Jasmine must take care of it until it was better. After seeing her apprentice battle with her own strength she let her be her apprentice again saying she was never expelled in the first place. This is an example of her tough but fair personality, a trait she did not have in the games. 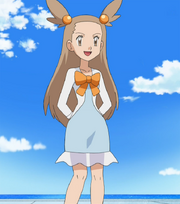 She appeared again in Nerves of Steelix showing off her bravery by jumping onto her Steelix' head from a very high cliff (very different from her game counterpart). She can also be one tough cookie in battle, but in the end, she lost and, as Gym Leader, she gave Ash the Mineral Badge.

She then appeared in Four Roads Diverged on a Pokémon Port in her new HeartGold and SoulSilver look and was happy to see Ash again. She had participated in contest battles with her Steelix learning new things along the way. She lost in a battle with Flint of the Elite Four and strived to become stronger ever since.

She battled Brock in the fight where all Kanto and Johto Gym Leaders fought each other and she won because no one knew there was such a thing as a steel type Pokémon, and Brock was suprised that Onix had another evolution that is none other than Steelix. Professor Oak explained that there was a new discovered type called Steel Type.

Pokémon in the Anime

Pokémon in the Games