James (Japanese: コジロウ Kojirou) is a member of Team Rocket which is an evil team who try to capture rare Pokémon and his trio has a keen eye on Ash's Pikachu. 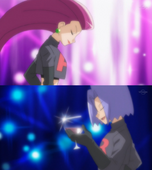 Jessie and James in the Unova region.

In the anime, he is a common member of Team Rocket and in many ways, is the anime representation of the Male Agent During his adventures in trying to capture Pikachu, James is part of a unit made up of himself, Jessie, and Meowth. Although born into a rich family with loving parents, he runs away from home to avoid Jessebelle to whom he was supposed to marry later on. With a very caring and thoughtful personality, James can sometimes have a hard time dealing with the "rotten things" he and his team mates do from various times to get what they want, but in the end he fulfill his obligations with less-admirable results, he also gives out information on Pokémon whenever Meowth cannot do it himself via Index cards. James is also a bottle cap collector as well. In a flashback that James was having it was about a man that cheated him into buying a Magikarp. The same guy appeared in "All aboard the St. Anne and the one when Jessie gets a Wobbuffet.

As of his, Jessie's and Meowth's promotion and transfer to Unova, James has become a highly skilled stealth artist, an excellent hacker and is often successful in many missions with his team mates to the point of the trio becoming a serious enemy for Ash and co. The trio were key in Team Rocket's Meteonite plan, taking order directly from Giovanni himself as well as his secretary. James and his team-mates worked together with Pierce and met Doctor Zager.

Once the plan culminated, James and his team-mates were asked to be as they please in Unova, so they continued working hard to do Team Rocket good and now work closely with Zager. Ash has also become less important to them but they will still antagonize him if he intereferes in their plans.