Fly Me to the Moon (Japanese: ポッポとデカポッポ！まだみぬそらへ!! Poppo and the Enormous Poppo! Towards the As Yet Unseen Sky!!) was first aired on August 16, 2001

The gang sets off exploring the first island of the Whirl Cup for a while. Misty spots a wild Corsola and starts going off with her little speech about being the best Water Pokémon Trainer there is. Although she wants a Corsola, she can't because she doesn't have a boat. A man comes by and says it would be impossible either way, pointing out the whirlpools all around. He says he's Wilbur, one of the people who live on the island. He invites them over to his place, which is across a river. As they get to the bridge (a rope bridge), no one really wants to go. Misty goes on first for a corsola and everyone follows. A wind begins to blow and it spins the bridge around and throws them to the other side. Afterward, Wilbur calls out and a flock of Pidgey come towards him. The Pidgey don't look normal, they are really fat. Wilbur explains that the Pidgey are really overweight because of the lack of predators due to the whirlpools. Team Rocket scopes them out from above, seeing that there could be another good catch for the day.

When they reach Wilbur's house, another Pidgey soars by them and lands on the roof. Wilbur says that's his special Pidgey, Orville. When they come inside, there's a painting on the wall with a few Pidgey flying towards the sun. They call up Professor Oak and he explains that the Pidgey are overweight are due to their eating habit. 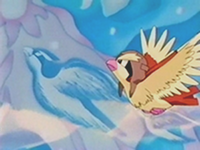 Later Wilbur starts to explain about Orville. A while ago when Orville was still a fledgling, he really got interested in that painting. It also set his aim to fly to the sun, which Wilbur seemed to understand. So he decided to train Orville to fly, which started off to be a good start then improved. One day while Wilbur was Pokémon training with Orville, he decided to hanglide towards the ocean and see if Orville was capable. Orville managed for the first few minutes but couldn't keep up and started to lag down towards a whirlpool. Orville then noticed the sun, which reminded him of the painting and soon Orville was able to fly back up and with ease.

Team Rocket, overhearing this, devised a plan that could get them both Orville and Pikachu. After Wilbur was done, Team Rocket arrived in disguises. They make a proposal that they could help Orville reach his goal, no charge, and they could monitor him from the balloon. The deal seemed to be too good to pass up so Wilbur agreed. Later that night, Meowth came over to where Orville was sleeping and started to talk with him, telling him to never give up his dreams like he did when he learned to talk. Meowth gives him a headset so that they could get communication during the flight tomorrow.

The next day, everyone goes inside the balloon and begin the ascent. James activates the rocket boosters and they go high very fast. After the short ascent, Orville takes off, going upwards. Meowth made relay conversations during the whole time. While they were watching Pidgey, Ash seemed to notice that he was going for something, a flock of Spearow! Orville went through them still going upwards and the Spearow started to give the chase, but they couldn't catch up to him. Then a Fearow took charge and started to chase after Orville. Seeing that it might eat Orville, Ash had Pikachu give it a Thunderbolt. The falling Fearow lands on the balloon, puncturing the covering layer, revealing a Meowth balloon. Ash notices the balloon and thinks something fishy is happening. Jessie and James remove their costumes revealing themselves as Team Rocket and begin reciting their motto, but Misty interrupts them.

Soon they are very high up, everyone had to put on oxygen masks as they watched Orville make his way farther up. Meowth continued the conversation with Orville. Soon they were so high up that even Pikachu and Togepi who didn't need the masks needed them. Then they saw that Orville had reached a altitude so high, he was growing frost all over. Despite this, Orville kept aiming for the sun. Orville kept thinking as he went and then decided, it was over, he done it. Orville went down for a fast dive towards the ground. Meowth tells Orville to open up his wings so he can turn around to the balloon. Orville complies, then finally meets altitude with the balloon. Everything looked alright, except for the fact that Orville went through the balloon to break the fall. The balloon started to descend slowly and Orville was in dire need of oxygen, Meowth grabs a mask and puts it on Orville. Orville remains unconcious. Ash tells Pikachu to give it a ThunderShock, acting as a defibrillator which wakes Orville up. They cheer as it worked. Overhead the hole gets bigger and they plunge towards the ground. The other Pidgey on the ground notices that the balloon is falling fast. They all start flapping their wings and running towards the balloon. Misty notices and tells the others to look below. The Pidgeys muster enough strength to fly up to the balloon and managed to headbutt the basket, breaking the fall.

Soon everything was alright for Wilbur and Orville. Orville soon became a hero to the other Pidgey. Meanwhile one of the rocket boosters started off automatically, sending Team Rocket blasting off. The gang said their goodbyes and headed off to the next town.

Team Rocket had crashed onto a cliff tree and are hanging. Wobbuffet comes out from one of the brush but they wonder where Meowth is. Meowth, sitting on the top branch, was talking to Orville about the moon and maybe he should aim for that.