Iris Pallida is one of Ash's traveling companions in the Unova region. She is a friend of Ash (and Pikachu), Cilan, Serena, Clemont and Bonnie (and Dedenne).

When she was little, Iris spent most of her time playing with wild Pokemon. One day, a Drilbur took Iris's friend Patrat's home. For ten days, Iris kept challenging the Drilbur but is always losing to it. On the tenth try, she was able to fight but Drilbur almost fell from the top of a cliff. Iris saved him, and he became her Pokemon.

They entered the tournament of the Village of Dragons, and won. During the final battle Drilbur evolved into Excadrill. However, Iris and Excadrill lost their 100th battle against Drayden, who secretly nods to the Elder.

Iris is a wild girl that Ash met while traveling in the Unova region. Ash first encountered Iris by mistaking her hair for a Pokémon (since he saw her in a bush picking berries and used his Pokédex, which told him that the Pokémon was in her hair.) He then threw a Poké Ball at her head and she then yells at Ash but soon becomes quick friends with his Pikachu, by hugging him and poking his cheeks which caused him to zap her, for Pikachu gets mad when he gets annoyed by another trainer. Her goal used to be a secret to Ash and Cilan, though it is revealed in BW030, that her goal was to become a dragon master. She also wishes to see the legendary Pokémon Zekrom. She appears to be a wild child and has been seen swinging from vines in forests in order to get from place to place.

Iris holding the set of wings she won at the Club Battle Tournament.

Unlike May or Dawn she practically radiates confidence. On the tomboy scale she is between Misty and May. Her expressions unseen by others suggests a sly, almost manipulative, but well meaning nature. Like Misty at the start of their journey, Ash is in the dark that Iris may or may not be a Gym Leader. Also like Misty, Iris thinks Ash is a little kid but helps him out since he doesn't know a lot about the Unova region. (Even so, Iris acts like a kid herself, but her catchphrase is saying to others "You're such a kid.")

In BW036, she meets Georgia , her rival, who defeated her when they first met. She also told Ash and Cilan of how she obtained her Excadrill: When she was younger she played with all the Pokémon in the forest and learned that a bully Drilbur stole a Patrat's food.

In BW040, she entered the Club Battle Tournament and won the Wing Set. 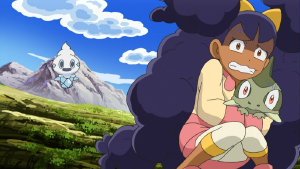 Iris and her fear for ice-type Pokémon

Iris cheered on for Ash in his Gym Battle with Elesa. Then she and Ash have some fun in Nimbasa City visiting all the attractions. Iris also meets Champion Alder, had the opportunity to befriend some Deino that belonged to other trainers and she also dressed as a shrine maiden to summon Landorus.

In BW082, Iris appeared to be glad that the Opelucid Gym was temporarily closed.