Iris' Excadrill is the second Pokémon that was caught and is currently owned by Iris. 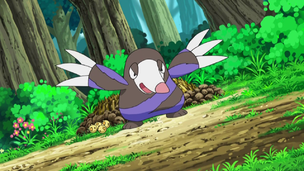 Excadrill, as a Drilbur, first met Iris as a child after tormenting some Patrat and stealing their food. She challenged him and after being defeated countless times, Iris finally managed to get the better of the Drilbur and got him tangled in some vines. Unfortunately, he was dangling over a cliff. Iris saved him from a deadly fall and the two began training together. Drilbur won all of his matches through one-hit KOs, never taking a hit in the process. They eventually entered a tournament, where he evolved into Excadrill while battling a trainer's Druddigon and won, earning Iris a streak of ninety-nine straight wins. Iris, looking to get her 100th win against a Dragon Master, challenged Drayden to a battle which he happily accepted. Excadrill put up a good fight against Drayden's powerful Haxorus, but he found himself taking hits for the first time. Haxorus soon knocked Excadrill out, and Excadrill, ashamed of having lost and thinking he let Iris down, closed himself off from her.

He was later introduced to Ash and Cilan in The Bloom Is on Axew! when Iris' Axew got stuck in the horns of a wild Scolipede, and both Cilan's Pansage and Ash's Snivy tried and failed to stop it. Reluctantly, Iris sent out Excadrill to help. But as soon as he came out, he stayed in his inactive state and refused to do anything. After Iris rescued Axew herself, Excadrill came out of his inactive state and attacked Scolipede after Scolipede inadvertently kicked him. He easily defeated it and sent it flying off into the horizon. Excadrill cried out in victory before going back into his inactive state.

Iris sent out Excadrill to help out in Dancing With the Ducklett Trio! when Ash and Pikachu went missing after falling down a hole. However, Excadrill refused to help, remaining inactive and forcing Iris to recall him. He appeared again for a short time in Emolga the Irresistible! to fend off a swarm of Swoobat, but as usual he just remained idle. He then fell for Emolga's Attract and was returned to his Poké Ball. Then in the next episode he was brought out by Emolga's Volt Switch, but still did nothing.

In Iris and Excadrill Against the Dragon Buster!, after Axew was knocked out by Georgia's Beartic, Excadrill was sent out to battle. After intentionally being knocked into a tree, Excadrill came out of his stasis and battled the Freezing Pokémon. He was knocked out and returned to his idle state of being curled up. Later that night, he wandered off and managed to learn how to use Focus Blast, but could not perform it properly. Iris then trained with him, and together they managed to perfect the attack. With his confidence in his Trainer restored, Excadrill re-challenged Beartic, which resulted in a draw. Despite tying, Excadrill was still pleased with the results, embracing his Trainer in a hug.

Iris used Excadrill in the final round of the Club Battle in Club Battle Finale: A Hero's Outcome! in her battle against Ash. He went up against Ash's Pikachu, and after a long battle, managed to beat the Electric Mouse Pokémon, allowing Iris to win the tournament.

In Battle For The Underground!, he was let out of his Poké Ball by Snivy when she found it among those that Team Rocket trio had stolen from the Nimbasa Pokémon Center, to free Pikachu and Axew from their cages with Metal Claw. He later helped fight off Dr. Zager's helicopter, while the other Pokémon worked out an escape.

In Stopping the Rage of Legends! (Part 1), Excadrill battled Tornadus and Thundurus in an attempt to halt their rampage. He landed a hit on the legendary Pokémon by combining his Drill Run with Snivy's Leaf Storm, but was eventually defeated by the powerful opponents.