From the Azurilland Wiki, a database for the Pokémon series that anyone can contribute to
Jump to: navigation, search
← Monferno | Infernape | Piplup →

Infernape recieved its name from the words "Inferno" which means fire and "Ape" which means tailless monkey even though Infernape has one. Its Japanese name Goukazaru (ゴウカザル) is reference to the Japanese name of Sun Wukong, the Monkey King (whom this Pokémon is based on) from "Journey To The West", Son Gokū. 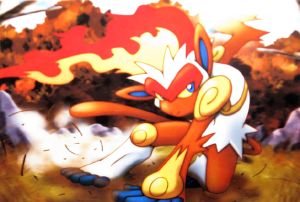 Infernape is a brown and white ape-like Pokémon with flames sprouting from its head. It has several gold plates that cover its body on its shoulders, wrists, knees, and chest. Infernape's arms, legs, and tail are a dark brown color while its upper body, forelegs, and head are white. It is the fastest starter of the Sinnoh starters last evolutions. It has brown ears but inside it's blue. Its feet are white but the toes are blue.

Infernape have the ability Blaze which ups its attack to 150% when its HP is at 30% or lower.

Infernape use a combat style that utilizes all four of its limbs, similar to the Muay Thai fighting style.

Infernape first made an appearance in the Pokémon movie The Rise of Darkrai. Ash's Monferno evolved into an Infernape in the episode "Fighting Ire with Fire!" of the Pokémon Diamond and Pearl anime. 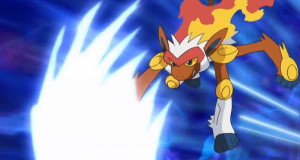 In the Pokémon Adventures Manga, Pearl owns an Infernape.

Infernape is the evolved form of Monferno as of level 36. And is the final Evolution of Chimchar

Infernape first appeared in the Generation IV games. It is the final stage of the Starter Pokémon Chimchar, and the evolved form of Monferno. It will evolve from a Monferno at level 36.