Celebi at the temple 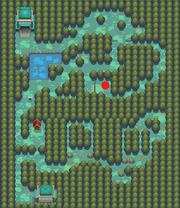 Ilex Forest is an area of dense forest located in Johto, found on the west of Azalea Town and south of Goldenrod City. Upon the player's first visit, there is one man standing there, looking for his Farfetch'd. He asks the player to find his Farfetch'd around the forest, and so the player must do this quest as they cannot access the other exit due to a tree which requires HM01 Cut to pass through. Upon finding the Farfetch'd, it runs away, and the task becomes making Farfetch'd run back to its owner by approaching it. The position in which the player is interacting with it will change the direction the Farfetch'd will run. After chasing it, another man beside the Farfetch'd will join with the same man at the beginning. The man then rewards the player with HM01 Cut for their troubles.

In the Generation II games, one can find a man who gives you the TM Headbutt. In Pokémon HeartGold and SoulSilver, the man will teach the player's Pokémon the move because Headbutt isn't a TM in Generation IV.