Pokémon Scent-sation!(Japanese: エリカとクサイハナ Erika and Gloom) is the 26th episode of the Pokémon anime and of Pokémon: Indigo League.

Ash, Misty, and Brock have reached Celadon City at last. Everyone except Ash notices a sweet smell in the air. Brock runs off and Ash follows him to a perfume shop with some girls inside. Ash tells Brock he is wasting time and that they should leave but Ash can't find Misty or Pikachu. Brock points to inside the store and Ash sees Misty and Pikachu inside. Misty asks the manager how much a bottle of perfume would cost and Ash says that perfume is a waste of money. Everyone in the store, including his friends, give Ash an angry look and they kick him out of the store. Ash gets to the Celadon City Gym, but the trainers at the front of the gym won't let him in. They know he hates perfume and since the perfume comes from the gym, they refuse to let him in. They take a stamp and stamp a red x on his forehead and tell him he is banned from the gym.

Meanwhile, Team Rocket sets up a ladder so they can sneak into the gym and steal the perfume formula. They explore the forest inside the gym and Jessie runs into a Gloom. James waves his hand in front of the Gloom's face, waking it up. James sends out Koffing and tells it to use Poison Gas. But the attack doesn't work on Gloom and it relealses its purid smell, knocking Team Rocket out. Meowth isn't hurt by it because he doesn't have a nose, but the trainers in the gym whack him with a hammer. The trainers stamp red xs on their heads, take them outside, and tie them to a tree.

Ash finds them tied up in the tree. James asks Ash if he can untie them, but Jessie says not to ask him. She makes fun of Ash because he was rejected from the gym. Jessie says she will help him get inside the gym, but only if he unties them. Ash is a bit aprehensive about helping Team Rocket, but he needs to get into the gym, so he accepts their offer. He unties them and Team Rocket takes him to a department store and they put a blonde wig and a dress on him so he can sneak into the gym. They also tell him to speak in a high pitched voice.Jessie and James disguise themselves so they can pretend to be Ash's parents. They decide to enroll him at Pokémon training classes at the gym under the name Ashley. When they get to the gym, Ash notices that the girl registering him is the same one who kicked him out of the perfume shop. Ash decides not to say anything so he doesn't blow the disguise. Team Rocket runs off to find the secret perfume formula and Ash unknowingly distracts the trainers. Meowth pulls out a bomb ( or blaster ball as they call it) and asks James what their plan is. Jessie tells him to plant the bomb.

The trainers work out with their Pokémon while Erika tells them a story. Ash comes into the room and he sees Misty, Brock and Pikachu with the other trainers. Ash discovers that Erika is the gym leader and the perfume manager that kicked him out of the shop. Brock indroduces Erika to Ash/Ashley. Misty asks Erika why Gloom doesn't emit the awful smell. Erika explains that if Gloom feels safe, it won't let off the smell. Erika remembers how she met Gloom when she was a little girl and she ran into a Grimer. Gloom came and rescued her by letting off the smell and scaring the Grimer away. When Erika finishes the story, Misty says that she wishes Ash could have heard the story. Ash speaks in his normal voice and Misty is confused. Pikachu figures out that Ashley is Ash and jumps on him and shocks him, destroying the disguise. Ash challenges Erika to a gym battle while Team Rocket breaks open the safe with the formula in it.

Erika accepts the challenge and sets up a three on three battle. Ash sends out Bulbasaur and Erika sends out Tangela. Bulbasaur uses Vine Whip, but Tangela uses Constrict and then Stun Spore.Ash recalls Bulbasaur and Erika offers to heal it with a Paralyz Heal, but Ash refuses. He considers sending out Primeape, but knowing how wild it is, he sends out Charmander. Erika sends out Victreebel and it uses Razor Leaf. Charmander uses Flamethrower and Skull Bash to knock out Victreebel. Erika sends out Gloom and it releases its smell. Charmander jumps into the air holding its nose before it faints. Pikachu steps forward to battle and Ash is sure Pikachu will win.

Team Rocket interrupts the battle and drops down onto the battle field. Meowth detonates a bomb, while he's still holding it, and everyone goes flying. Team Rocket escapes with the perfume formula, and the bomb creates a huge fire. Everyone runs out of the gym, Ash and Misty have Squirtle, Starmie and Staryu try to put out the fire with Water Gun. Erika runs around like crazy because she can't find Gloom. Ash runs back into the gym and fights the flames to rescue Gloom. Ash finds Gloom, very scared. Ash steps towards it, but Gloom releases its smell. The ceiling about them starts to cave in and Ash holds his breath and picks up Gloom. Ash stops holding his breath because he's about to pass out and he notices Gloom stopped releasing its smell. Ash remembers from Erika's story that Gloom won't release its smell if it feels safe. 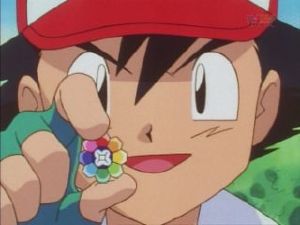 Ash runs out of the gym, carrying Gloom, and everyone cheers for Ash's bravery. The next day, Erika gives Ash the Rainbow Badge for saving Gloom. Ash reminds her about the lost formula, but Erika tells him not to worry, the bottle had Gloom's smell in it. Meanwhile, Team Rocket opens up the bottle, the smell knocking them out. Ash and his friends head to the next gym.

Jesse: "Meowth you don't have a nose."
Meowth: "Huh? AHHH! My nose! The stink must've dissolved it off my face. Hm? Oh, I forgot, the cartoonist never gave me a nose."

Meowth: "Near us so I wouldn't lose it."
Jessie: "At least we managed to steal this, their secret perfume formula."

Erika: "(giggles) No they didn't. The bottle they stole was one of our perfume's ingredients: Essence of Gloom."

Watch this and other episodes: Pokémon Episode 26: Pokémon Scent-sation!