Ash, Misty, and Brock are on a boat taking them from Porta Vista to Maiden's Peak. Ash says that they are going to land soon and Brock says he doesn't care about seeing land again because summer is over and he has to wait all year for the next one.

After landing, Ash and his friends discover that they are just in time for the annual Summer Ending Festival. When they decide to go to the festival, Brock sees a girl at the top of the cliff. He falls in love with the girl and he runs to the cliff but he is run over by tourists. By the time he has reached the cliff, the girl has disappeared. Pikachu notices that the girl is actually a Gastly but Ash and Misty don't notice the girl at all.

As always, Team Rocket has followed Ash and friends to Maiden's Peak. They need money, so they look around for dropped coins. James sees the girl Brock saw earlier, only this time by the dock. As they leave the dock, James notices that the girl is gone.

During the festival, Ash, Misty, and Brock meet an old lady who warns them that the beautiful girl Brock saw will lead them to a cruel fate. The old lady calls Misty a scrawny blabbermouth and Misty says that they should go somewhere else.

A little ways away, Team Rocket start looking for coins again but they find nothing. Then James spots a penny lying on the ground and as he approches it, he meets the old lady Ash, Misty, and Brock met earlier. She warns him about the beautiful girl. Then Officer Jenny takes the coin James found away. She says that they should go down to the station with her to fill out a report. Team Rocket stammers that they don't need to and they run off.

Both Ash and his friends and Team Rocket go to the shrine of the maiden. They see the greaset treasure of the shrine, the painting of the maiden. Brock and James realize that the maiden is the girl they saw earlier and they try to approch the painting, but they are stopped by the man presenting the painting to tourists. He tells the story of the maiden, she waited for 2,000 years for her lover to return from the war and she evenutally turned to stone.

Both groups go to take a closer look at the cliff and Meowth makes a plan to steal the painting and sell it for a lot of money. Team Rocket plans to steal it later that night. As the sun sets, Brock is still sitting on the cliff. Misty and Ash try to get him to come back to the festival, but Brock asks if he can stay a little longer, so Misty and Ash leave him there and they go back to the festival. When the local Pokemon Center starts to shut its doors for the night, Brock is still on the cliff. Ash decides to go look for Brock, but Nurse Joy stops him and gives him a small lecture on how important sleep is.

In the middle of the night, Meowth wakes Jessie and James up so they can steal the painting, but they aren't happy to wake up. Suddenly, a powerful wind starts blowing and the doors of the Maiden's shrine open up. The ghost of the maiden floats out, makes Meowth fall asleep, and wakes up James. The ghost also shows herslef to Brock saying she has waited a while for him and Brock says he has waited a while for her too.

Ash and Misty start looking for Brock the next morning and Jessie and Meowth start looking for James. Ash and Jessie meet face to face and they both notice that they are both looking for a missing person. Jessie recites the Team Rocket motto by herself, but then they hear James say his part. James is thrown out of the shrine, followed by Brock. As they try to get James and Brock back to normal, the old lady reappears and she reminds them about the ghost of Maiden's Peak. Pikachu shocks James and Brock to get them back to normal.

They all go inside the shrine and the old lady says that all young men who have visited Maiden's Peak have fallen in love with the ghost. They decide to protect themselves from the ghost with anti ghost stickers and they stick them on the shrine and themselves. But when night comes, the stickers don't work and like the night before, the ghost of the maiden appears.

After Jessie shoots a bazooka at the ghost, it summons some skull like ghosts. Ash scans them with his Pokédex but he doesn't get an answer. He accidentally points the Pokédex at the ghost of the maiden and the Pokédex identifies it as a Gastly. Since its disguise has been revealed, Gastly transforms back to its normal form. Ash then challenges it to a battle.

Ash sends out Pikachu to battle it, but Gastly makes a large, living mousetrap to scare Pikachu off. Meowth says the mousetrap doesn't bother him and Gastly makes a ball of yarn for him to play with and to distract him. Jessie sends out Ekans, who is scared off by Gastly's mongoose. James tells Koffing to use Poision Gas, but it is stomped down by the mongoose who was wearing a gas mask.

Ash calls out Charmander, but quickly has to recall him because Gastly makes a fire extinguisher. Ash calls out both Squirtle and Bulbasaur. Gastly makes a Blastoise and a Venasaur, which scares Ash's Pokémon. For fun, Gastly combines them into a Venustoise. Misty tries a different way, she uses a stake, a cross, garlic, and a hammer to fight Gastly. The sun then starts to rise and because Gastly hates sunlight, it disappears saying that the ghost of the maiden and the old lady will come back to the festival next year. 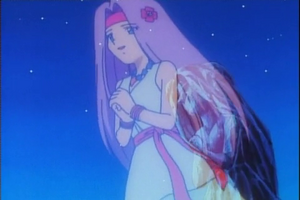 The next night the festival continues and Ash and his friends have fun since everything is back to normal. The true ghost of the maiden appears and thanks Gastly for keeping her legend alive. Gastly responds by saying he vows to find her lost love, and when he does, he'll remind her that she still waits for the day he'll return to her.

A heartbroken Brock decides to join Ash and Misty and, strangely, Team Rocket, who are celebrating the end of the festival.

James: "To extend our reach to the stars above."
Jesse: "Jesse?"
James: "James."
Jesse: "Team Rocket blast off at the speed of light."
James: "Surrender now..."
James bursts out of the house.
James: "...Or prepare to fight."

Misty: "Then how about this?"
Gastly: "What's that?"
Misty: "It's a cross. I also got garlic, a steak and a hammer."
Gastly: "Augh. What do I look like, a vampire or something?"

Maiden's Ghost: "Thank you Gastly."
Gastly: "My pleasure. I enjoy keeping alive the stories and legends that people have forgotten over the years, and if I do a good job of it, I make a few bucks as well."

~Brock about the Maiden's Ghost.

Watch this and other episodes: Pokémon Episode 20: The Ghost of Maiden's Peak