The Water Flowers of Cerulean City (ハナダシティのすいちゅうか The Suichūka of Hanada City) is the seventh episode of the Pokémon anime series, except in the United States, where it was broadcast after Battle Aboard the St. Anne! The episode was first broadcast in Japan on May 13, 1997 and in the United States on September 6, 1998. This episode features a recap of the last episode and features Misty's three older sisters: Daisy (the oldest) Violet (second oldest) and Lily (second youngest).

At the start of the episode, Misty tries to convince Ash and Brock to bypass Cerulean City and go straight to Vermilion City. She fails and says that she will wait for Ash and Brock outside of town.

Later, Team Rocket enters a building looking for something to steal Pokémon with and they find what they're looking for. 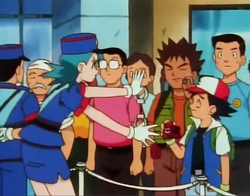 The next day Ash and Brock enter the city, then they notice that Misty is gone and Ash doesn't mind it though Pikachu misses her. Later that day, they see a crowd of people around a building and wonder what's going on. They head over and see Officer Jenny standing at a crime scene. Officer Jenny accused them of being the thieves that stole a giant vacuum machine. Ash and Brock prove to Officer Jenny that they are innocent, she lets them go. After that Brock asks Officer Jenny out on a date but she turns him down. She then tells Ash what the thieves stole and tells Ash and Brock to move along.

Ash asks Brock if he can tell him anything about the Cerulean City Gym Leader. Brock says that since he is also a Gym Leader, he can't tell. Brock says that he has something that he needs to do and Ash heads to the Gym by himself.

When Ash arrives at the Gym, he sees three sisters performing a show. Ash confronts them backstage and discovers that they are the Gym Leaders and he challenges them to a gym battle. The girls( Lily, Daisy, and Violet) tell Ash that they can't because their Pokémon have battle three other trainers from a place called Pallet Town and their Pokémon are all worn out. The only Pokémon they have left is a Goldeen that only knows Horn Attack. They offer Ash a badge without battling when Misty appears saying that she, the fourth Cerulean Sister, will battle him.

It turns out that Misty is the youngest Cerulean Sister and the other three call her a runt. After Misty fights with her sisters, Misty challenges Ash to an official 2 on 2 gym battle. Ash accepts.

At the start of the battle, Ash tried to send out Pikachu, but Pikachu didn't want to battle Misty. Ash then sends out Butterfree instead. Misty's Staryu quickly knocked it into the water, making it lose. Misty withdraws Staryu and sends out her Starmie and Ash sends out his Pidgeotto. Pidgeotto uses Whirlwind on Starmie, but it jumps into the water and attacks Pidgeotto. Pidgeotto uses Gust on Starmie, making it hit the wall.

Just as Ash is about to win, Team Rocket bursts in with the stolen vacuum and tries to steal all the water Pokémon with it. It sucks in all the Pokémon including Seel and Pikachu but Ash tells Pikachu to use Thunderbolt due to water conducting electricity. The attack causes the machine to malfunction and Team Rocket to get electrocuted and fall into the water. They are then sucked down into the vacuum and, to the delight of Seel, blast out from the other side and fly off into the sky.

After Team Rocket goes flying, Daisy gives Ash the Cascade Badge. Misty protests this until Daisy points out that if Ash used Pikachu from the start he would have won. Ash gladly accepts the badge. Ash and Misty leave the gym and Brock meets them and they all head out to Vermilion City.

"Uhhh, Ash, you don't want Pokémon from there, trust me." — Misty
"Why not?"
"Because they're all..." — Misty
"All what?"
"Very scary ghost Pokémon that look like this. Like monsters." — Misty
"(laughter), Nice face Misty. Come on Brock, Let's go Pikachu." — Ash after a slight pause

"Hey, What about Vermilion City? It's right on the water and there are lots of neat Pokémon, and you can watch all the giant yachts pulling into the harbor. And there's a little park way up on a hill where you can sit and watch the sunset that's so romantic." — Misty
"Uh huh." — Ash
"It's much nicer than that old Cerulean City so let's get going." — Misty
"Ok, let's go." — Ash
"Really?" — Misty
"To Cerulean City." — Ash

"Aw, I never wanted to wind up back here." — Misty talking about Cerulean City

"Well, That's evidence enough for me. I'm sorry I was suspicious. Now I'm suspicious of my sister-in-law, she sure has weird taste in friends." — Officer Jenny

"Um, miss. I was wondering, since I'm new in town maybe we could get together tonight and you could show me around." — Brock
"Well I'm not off duty till past your bedtime, and I may even have to work 'round the clock to catch these burglars." — Officer Jenny

"Know yourself, know your adversary and you hold the key to victory." — Ash
"You sure know some pretty deep stuff." — Brock
"I learned that one from Dexter." — Ash

"The three of us are the Gym Trainers here." — Daisy
"We're the sensational sisters." — Lily
"We're world famous." — Violet

"We just got beaten three times in a row by kids from this nowhere place called Pallet Town." — Violet
"Not again." — Ash

"Well then I guess like you came back because you couldn't make it as a Pokémon trainer." — Daisy
"It wasn't my idea to come back here. The only reason I'm here is because he wanted to come." — Misty
"Well he's totally not someone I'd choose for a boyfriend but you're no prize yourself." — Daisy
"My bike rent! If I battle him that'll prove I'm not a quitter and I'm just a good a trainer as you three." — Misty
"Well, you are the only one of us with the Pokémon that can actually battle." — Daisy
"All right Ash, are you ready to rumble?" — Misty

"Leave it to a girl to show off her jewelry." — Ash
"Quit stalling and let's get this show on the road!" — Misty

"Which side are you clapping for?" — Violet

"If Staryu can get Butterfee underwater I win. Water Pokémon always have the edge in the water!(Laughter)" — Misty with her strategy

"Misty is totally awesome." — Daisy
"Well we three got the good looks in the family so I guess she had to get some talent." — Lily

"We've gotta protect the Pokémon." — Misty
"Like what about my hair?" — Violet

"It's times like these that make me want to go straight." — James

"Well now I know how it feels to be all washed up." — James
"We'll never come clean." — Jessie

"You could say your match had to be postponed like due to drain." — Violet

"I wanted to win." — Misty
"I guess I'm not gonna get that Cascade Badge." — Ash
"Wrong. We're giving this badge to you." — Daisy
"Huh?" — Ash
"How come he gets the badge? He didn't win." — Misty
"Pikachu was the one that like totally saved us all, and if he had used Pikachu from the start, there was no way your water Pokémon could've won." — Daisy
"Aww man." — Misty

"Misty, you just go right on trying to be a Pokémon trainer. You might as well be good at something, cause you'll never be stars like us." — Lily
"You keep that up and you'll be seeing stars!" — Misty
"Chill out." — Violet
"Misty, be careful. You know we love you." — Daisy