IL006: Clefairy and the Moon Stone

Clefairy and the Moon Stone (ピッピとつきのいし Pippi and the Moon Stone) is a the sixth episode of the Pokémon anime series, except in the United States, after Battle Aboard the St. Anne was broadcast as the first episode. The episode was first broadcast in Japan on April 8, 1997 and in the United States on September 9, 1998. The episode follows Ash Ketchum, Misty, Brock and Pikachu as they arrive at Mt. Moon, where they save Seymour from a flock of Zubat and later save the Pokémon of Mount Moon from Team Rocket.

The episode begins with Ash, Brock, Misty and Pikachu walking along a path towards Cerulean City. They suddenly hear a scream and find a flock of Zubat attacking a man. Ash has Pikachu use thunder shock to send the Zubat flying back in to the cave. A grateful Seymour springs to his feet and hugs Ash so tightly that Pikachu uses thunder shock to break free. The man then begins to thank Ash through poetry and then reveals his name to be Seymour, Seymour the Scientist. They then go inside the cave where they see the inside of the cave light up, with many Paras planting their mushrooms and a Sandshrew, exhausted as the lights is drying it out.

Misty asks Seymour why someone would attack the cave and Seymour then begins to explain his theory about the Moon Stone, stating that the Moon Stone is from outer space and helps to increase the power of the Pokémon, again using poetry to express himself. Misty states that is an original theory and after Ash nervously agrees with Seymour's theory, a Clefairy hops past holding a small rock. Ash attempts to capture Clefairy but is stopped by Seymour, explaining that Clefairy should be allowed to live in the cave.

Clefairy, who has gone down a side tunnel, cries out for help and is shown in a dead end, with the shadow of Team Rockets Team Rocket's Meowth shown over it. Ash then realizes that Team Rocket is behind the lights in the cave and, after doing their introduction, they admit to their plans to steal the Moon Stone to power up their Pokémon. Jessie and James state that Ash is only jealous because they won't allow him to join them, with Ash declaring that he would never join Team Rocket. A battle then ensues, with Team Rocket sending out Ekans and Koffing, with Ash sending out Butterfree and Brock sending out his new Zubat, which he announces he caught when entering the cave. Koffing uses smog, which is blown away by Butterfree and Zubat's Whirlwind attacks. Ekans uses its bite attack on Butterfree and Koffing its tackle on Zubat. Meowth is shown sneaking away as Zubat uses Supersonic. A confused Ekans and Koffing begin to attack themselves, allowing Butterfree to use Whirlwind, blowing Team Rocket out of the cave.

Ash and Brock, however, notice that Meowth was not blown away with Team Rocket. Clefairy is then shown leaving the cave, with Misty and Seymour following close behind. Meowth then reappears on a narrow bridge, with Clefairy jumping off and hitting Misty, causing her and Seymour to fall into some water. Meowth follows but is quickly defeated by Misty's Staryu, after Swift and Water Gun. Misty then recalls Staryu and then episode cuts to the evening, with Brock feeding Zubat and then Butterfree with Pokémon food. Seymour tries the Pokémon food, stating its 'not bad'. Ash also tries some, although he does not like the taste. 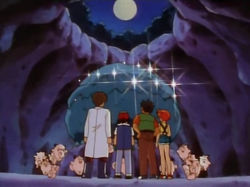 Team Rocket then re-appear and challenge the gang once again, for the Moon Stone. A nervous Seymour stands up to Team Rocket and the runs towards them, but he is tripped up by Meowth, losing his glasses in the process. Jessie and James once again bring out Koffing and Ekans, with Pikachu and Onix being used by Ash and Brock. Jessie tells Ekans to dive underground whilst Koffing uses smoke screen to cause a distraction. Ash brings out Pidgeotto to blow the smoke screen away and the gang realize that Team Rocket have dug a large hole and escaped with the Moon Stone.

Brock has Onix follow them down the hole and the three run out of the cave. A Clefairy hands Seymour his glasses and Seymour tells them that they should be trying to get the Moon Stone back. Jessie, James, Meowth, Ekans and Koffing are then shown sliding down the mountain with the Moon Stone. They are stopped when they hit Onix, who comes out from underground. Seymour and the Clefairy then appear out of the whole and all the Clefairy then begin to use Metronome, waving their fingers in the air. Ash, Misty, Brock, Seymour, Jessie, James and Meowth look on and watch, waiting to see what happens, with Misty and Seymour talking in line with the Clefairy's Metronome. The Metronome causes an explosion, with Team Rocket blasting off into the distance.

Ash, Misty, Brock and Pikachu then leave the cave and Seymour behind, with Seymour, the Clefairy and Clefable waving them off. The three continue to walk towardsCerulean City where they see a sign pointing them in the right direction. Brock, however, notices that someone has written on the sign. Ash takes a closer look and sees that it wasGary, who had written that Ash 'is a loser'. An angry Ash then runs off to try and catch up with Gary, with Misty, Brock and Pikachu running after him.

"Dexter, analyze." — Ash
"Zubat: Flying Pokémon with supersonic powers. Zubat live in caves and hate to fly outside in daylight." — Dexter
"Not these Zubat." — Ash
"This is no time for jokes. That guy needs our help." — Misty
"You're right, I'm sorry." — Ash

"The Moon Stone is an awesone boulder, a million years old or even older. Deep in the caves the meteor hides, though no explorer has found the place of the legendary rock from space. We've studied its fragments for many an hour, and discovered it increases a Pokémon's power. And that is why the attackers are here. They've come to take the Moon Stone, or so I fear." —Seymore's explanation of the Moon Stone.

"Don't you guys ever get tired of saying the same things over and over?" — Ash about Team Rocket's motto

"Butterfree, Whirlwind now! Blow them all the way out of the cave." — Ash

"Bye Meowth. Have a nice drip." — Misty after beating Meowth with her Staryu

"Hey! Is everybody alright?" — Ash
"We won't be bothered by Meowth anymore thanks to Misty the Mighty." — Misty

"You might not like it but the Pokémon sure do." — Brock after Ash tries some Pokémon food

"Amazing. These Clefairy form their own society. This is an incredible sight." — Seymore

"The Clefairy collect all of these rocks and, do the Macarena." — Ash

"You guys don't know when to quit." — Ash about Team Rocket

"Ha, did you have a nice trip?" — Meowth after tripping Seymore

"When you do visit outer space, I hope you remember to send us a post card." — Brock to Seymore

"This road leads to Cerulean City. Well I guess we're heading the right way. And there's something else scribbled here." — Brock
"Well they say that some kids like to write silly notes on these signs. What's it say? Gary was here? Loser?! Awgh that Gary. I'LL SHOW YOU!" — Ash
"What's the hurry?" — Misty
"He'll never learn." — Brock