Showdown in Pewter City (ニビジムのたたかい！ Nibi Gym Battle!) is the fifth episode of the Pokémon anime series, except in the United States, where it was broadcast sixth due to Battle Aboard the St. Anne being aired as the first episode. The episode was first broadcast in Japan on April 29, 1997 and in the United States on September 14, 1998. The episode follows Ash Ketchum, Misty and Pikachu as they arrive in Pewter City and prepare to challenge the gym leader, Brock.

The episode begins with Jessie and James digging a hole to trap Ash, Misty and Pikachu. They dig the hole and cover it with soil, however, they cover it so well that they fall into their own trap and the soil falls in on top of them. Ash, Misty and Pikachu are then walking up to the edge of Pewter City and an 'old guy' called Flint, who sells Pewter City souvenir rocks. Flint then shows them the way to the Pokémon Center where he meets the Nurse Joy of Pewter City who recognises him. Nurse Joy tells a confused Ash that she knows about him after talking to her sister in Viridian City. Nurse Joy points to a poster advertising the regional championships and Ash says that he will enter once he earns enough badges.

Flint then re-enters the scene and asks Ash if he intends on challenging the local gym leader, Brock and begins to laugh after listening to Ash's confidence before walking away. Ash and Misty are then shown talking about the upcoming gym battle in a restaurant and Misty offers her help, which Ash declines. Misty then leaves, saying that Ash won't defeat Brock, leaving Ash to foot the bill. Ash returns to the Pokémon Center and picks up his Pokémon. He heads to the Pewter Gym and challenges Brock to a match. Brock asks Ash whether this is his first match and then explains the special rules involved in gym battles. Brock then brings the gym field into the gym itself, forcing Ash and Pikachu to run out of the way.

The gym battle begins with Ash sending Pikachu on to the gym field and Brock sends out his Onix. Pikachu runs away and tags Pidgeotto's Poké Ball but is sent back into the match by Ash. Onix then uses its Bind attack on Pikachu, who responds by using a thundershock, which has no effect on Onix. Ash attempts to recall Pikachu, but it is blocked by Onix. Onix continues to use Bind until Ash surrenders in order to protect Pikachu.

A dejected Ash leaves the Pewter Gym carrying Pikachu and meets Flint outside, who tells Ash to follow him. They go back to Flint's cabin where Pikachu is asleep recovering. Ash talks highly of Brock and Flint says that Brock's skills could see him go further than just being the gym leader. They go to Brock's house where Brock is seen cooking and then sowing Suzie's skirt after she tears it. Ash and Flint then leave and walk through Pewter City, with Flint telling Ash that Brock can not leave as he has to look after his siblings after his 'good-for-nothing' father left to become a Pokémon trainer and his mother passed away.

Flint then takes Ash to a hydro-electric power plant on the outskirts of the city and says that it can be used to power up Pikachu. Ash asks Flint how he can know so much about Pokémon, with Flint responding that he just got lucky. Flint explains that the river is dry but that he has another idea. Ash then goes on to the water wheel and begins to push the wheel round using by walking on the wheel. This begins to power up the generator, which is connected to Pikachu, who begins to feel the pain of the increased electricity. Misty then appears and again offers her help in defeating Brock, with Ash telling her that he wants to defeat Brock by using the Pokémon that he raised. Ash continues to power the generator until it overloads.

The next day he and Pikachu return to the Pewter Gym and challenge Brock once again. Brock starts the match with his Geodude while Ash choose Pidgeotto. Ash has Pidgeotto use Gust attack, which fails to cause any damage and Geodude then begins trying to punch Pidgeotto. Misty is shown watching from the rafters, with Brock's siblings joining her. Pidgeotto then falls to the ground, exhausted, and Pikachu enters the battle. Pikachu uses a powerful thundershock to knock out Geodude, despite the type disadvantage. Brock then recalls Geodude and sends out Onix. A scared Pikachu then begins to use thundershock, not caring about where it aims. The thundershock causes a fire to start in the rafters. Onix, however, traps Pikachu using its Bind attack. Pikachu lets off a Thunderbolt attack, which causes Onix pain but when Pikachu runs out of energy Onix continues with its Bind attack. 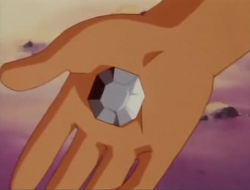 Brock tells Onix to release Pikachu but Ash refuses to end the match. The sprinklers in the gym go off due to the fire and Misty tells Ash that rock types are weak against water. Pikachu then uses an electric attack, which weakens Onix to the point that it collapses. Ash tells Pikachu to 'finish it off' but is held back by Brock's siblings, although he initially believes it is his conscience holding him back. Brock tells his siblings to leave Ash alone because it is an official match, although his siblings tell Brock that they can not watch Onix take more punishment because Brock trained hard to raise Onix.

Ash then realises that he would not have beaten Brock without the sprinklers going off and recalls Pikachu. Later Ash and Pikachu are seen walking away from Pewter City but are stopped by Brock, who runs after them. Brock then gives Ash his first badge, the Boulder Badge, and tells Ash that he defeated him both in battle and in being kind to Pokémon. Brock then tells Ash that he can not leave because he needs to look after his siblings. Flint then turns up and takes off his disguise, revealing himself to be the 'good-for-nothing' father of Brock. Flint then reveals that he could not face his family after failing to be a Pokémon trainer but that he should not take on his responsibilities as a father.

Ash then asks Flint why he helped him and not Brock, with Flint responding that Ash reminded him of himself as he didn't seem to have a chance on his own. Flint tells Brock to go fulfill his dreams. Brock then hands Flint a needle and tells him that Suzie always tears her dress, Timmy only eats cold spaghetti for breakfast, Tommy likes cornflakes for dinner, that Cindy sleep walks so he should tie a bell to her and that the twins do not like to bath. Ash, Brock and Pikachu then begin to walk off. Brock thanks Ash for allowing him to join him on his journey and points out Misty, who continues to chase Ash for another bike or the money to buy one. Ash decides to run away, with Pikachu and Brock following, in an attempt to lose Misty. They begin to run off and the camera shows Jessie, James and Meowth digging their way out of the ground, although they are trampled on by the running Ash, Pikachu, Brock and Misty. A depressed Jessie then reflects on Team Rocket's fate and states that they've 'reached rock bottom', just before they fall back into the hole as the episode ends.

"Pewter City is grey, the color of stone. This town has always been famous for stone." — Flint about Pewter City

"Everyone loses sometimes. You can't let that get you down." — Flint trying to cheer Ash up

"No Brock, I wanna play this match to the end." — Ash
"There's no point in going on. I really don't wanna hurt your Pokémon." — Brock

"Ash! Rock Pokémon are weakened by water." — Misty with a helpful strategy tip

"My conscience is holding me back. I can't bring myself to beat Brock. I'm imagining his little brothers and sisters stopping me from beating the one person they love." — Ash
"Ash, I think you'd better open your eyes." — Misty

"Those sprinklers going off was just an accident. Winning the match because of that wouldn't have proved anything. Next time we meet, I'll beat you my way: fair and square." — Ash
"Maybe." — Brock
"(Sigh), Just when he finally gets a lucky break, he decides to be a nice guy too." — Misty

"But why did you help me instead of Brock?" — Ash
"You reminded me of myself: you didn't seem to have a chance." — Flint