From the Azurilland Wiki, a database for the Pokémon series that anyone can contribute to
Jump to: navigation, search
← Kangaskhan | Horsea | Seadra →

Horsea (Japanese: タッツー Tattsuu) is a Water-type Pokémon introduced in Generation I.

Horsea is a Water Pokémon that resembles a sea horse. It is a small, light blue seahorse with tiny scales. Its belly and fin are cream colored. Its tail is always curled up tightly,[9] and it has a single fin on its back that is used for locomotion in the water. 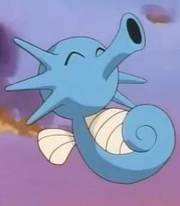 If they sense trouble, they spit ink towards the instigator. If the enemy is too strong, it quickly swims to safety.When they are a safe location, they can be seen playfully tangling their tails together.[14] Horsea do like swimming around, making them adept in using their fin. If the ocean current turns fast, however, Horsea will anchor itself by wrapping its tail around rocks or coral to prevent being washed away. It also has the ability to spit ink to escape any potential danger, because of this it can learn moves such as Smokescreen. They have been known to make their nests in the shades of corals.

Horsea can have the ability Swift Swim or the ability Sniper. Swift Swim increases Horsea's Speed when it is raining. Sniper powers up critical hits. They are known to be very accurate in shooting water.

Horsea evolves into Seadra at level 32.

In the anime, Misty noticed an injured Horsea in the coast, and caught it. Horsea has trouble functioning on land, so she didn't use it much in her adventures. However, when it was used, it tended to be very resourceful - using ink to draw pictures or leave trails. Near the end of the Kanto adventures, Horsea was feeling ill because Misty wasn't letting it out enough to get any exercise. She later decides to give it to her sisters at the cerulean gym for their water shows.

In the Pokémon Adventures Green had a Horsea on her team, using it in her crafty tricks such as cloaking areas with Smokescreen or leaving ink trails. It was later transferred to Silver, and eventually evolved into Kingdra.