Route 103 is located at the north of Oldale Town and west of Route 110. If you can't find Prof. Birch in his lab, he is probably here to do his fieldwork. After you become the champion of the Pokémon League, a new cave Altering Cave will be unlocked (Pokémon Emerald only) and will be next to the water bodies (east). 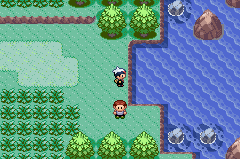 After you acquired HM03 Surf, you can access the water to the east in Route 103 and easily access both Mauville City and Slateport City via Route 110.