From the Azurilland Wiki, a database for the Pokémon series that anyone can contribute to
(Redirected from Ho-oh)
Jump to: navigation, search
← Lugia | Ho-Oh | Celebi →

Ho-Oh (Japanese: ホウオウ "Houou") is a Fire/Flying-type Legendary Pokémon introduced in Generation II. It was the Legendary Pokémon mascot of Pokémon Gold Version, and it appeared again in the game's remake, Pokémon HeartGold Version. When you catch Ho-Oh in the Tin Tower(Gold)/Bell Tower(HeartGold), it will be holding the Sacred Ash item. In HeartGold/SoulSilver, even if the player defeats it, it will re-appear after the player beats the Elite Four. 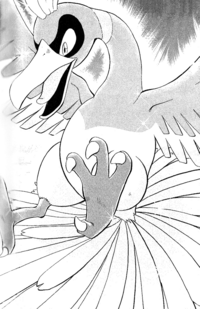 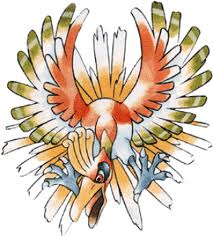 in the sky. Ash then sees it again in the episode " Gotta Catch Ya Later! " where it's flying towards the Hoenn region. It also makes an appearence on a painting in the episode "A Ghost Of A Chance", which is also the first episode where Ho-oh is mentioned by name.

Ho-Oh, like its lesser counterpart Moltres, is based on the legendary Phoenix, a creature of Greek Mythology also known as the Firebird. Many cultures worldwide hold the Phoenix as a symbol of Longevity, Resurrection, and Reincarnation. Thus, Ho-Oh epitomizes this belief, as it was reborn rising from its own ashes. It also used its vast powers to give new life to the first Raikou, Entei, and Suicune, after they perished in Ecruteak City's Burned Tower. It is believed that through its unique abilities, this mighty Pokémon created the Legendary Beasts of the Johto Region out of a Jolteon, a Flareon, and Vaporeon respectively. However, it is unknown whether this is actually true.

It is said that wherever a Ho-Oh flies, a beautiful rainbow appears behind it.

Ho-oh, a Legendary Bird Pokémon based on the Phoenix Bird, is a vastly powerful Fire-and-Flying type Pokémon. It can revive any Pokémon, is incredibly fast, and has the devastating Fire-Type attack,"Sacred Fire".

It also holds an item called Sacred Ash, which is like a Pokémon Center, only portable. This Held Item is unique in that it revives all fainted Pokémon in your party to full HP/full PP. If caught at Navel Rock in Emerald/FireRed/LeafGreen the Sacred Ash is buried under the spot that Ho-oh occupies. After Ho-oh is caught or defeated, press the A button and you will obtain the Hold Item Sacred Ash.

Ho-oh does not evolve. 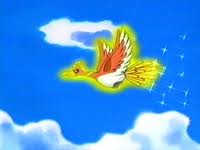 Ho-Oh in the anime

Ho-oh was first seen in the first episode, Pokémon - I Choose You!. It was one of the first Pokémon Ash has ever seen, but he doesn't know what it was until further on. When he announced to Professor Oak that he saw something, he pointed at Articuno; it was a thoughtless mistake. Ho-oh was mentioned many times in For Ho-Oh the Bells Toll!, though the only legendary Pokémon seen was Suicune. Ho-oh is then seen in Gotta Catch Ya Later!.

Its English name is simply another way of transcribing 鳳凰 Hōō or Suzaku, which is known to be the Japanese word for "Phoenix".