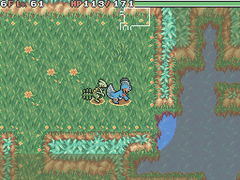 Hidden Land is a location you can visit in Pokémon Mystery Dungeon Explorers of Time and Darkness, and Sky along with your partner and Grovyle. There are fifteen floors and a futher eight on the hidden Highland. You cannot recruit any Pokémon here.

Near the end of the Hidden Land you come across the Rainbow Stoneship, where Dusknoir appears to take you back to the future. However, you, your partner, and Grovyle fight to avoid being captured. After winning, Dusknoir goes to attack you again but Grovyle blocks the way and gets struck. Grovyle then pushes himself into the portal with Dusknoir, leaving you and your partner behind. Grovyle's final words were "though the parting hurts. the rest is in your hands." You then take the rainbow stoneship and travel to Temporal Tower to save the world.

You can later replay this dungeon but only with you and your partner. But, once again can not recruit pokemon.