From the Azurilland Wiki, a database for the Pokémon series that anyone can contribute to
Jump to: navigation, search
← Gastly | Haunter | Gengar →

This Pokémon takes the shape of a sinister looking, angular floating face with fangs, and it has disembodied, clawed hands. When approached by people, it has a habit of reverting to a spherical form that obscures its eyes, mouth, and hands Haunter also likes to transform into solid things just to scare people. If you are sleeping or unconscious, Haunter can grab you and turn you into a ghost. But don't worry; it can return you into your body afterwards.

Haunter can have the ability Levitate, which cause all Ground-type moves to miss. It licks with its gaseous tongue, so getting close is dangerous. Because of its ability to slip through solid walls, it is thought to be from another realm. It enjoys scaring people and revealing horrible nightmares of their worst fears to them while taking pleasure in it. It is also thought to steal the souls of those who envy, so it is highly recommended that you keep your distance.

Haunter is the evolved form of Gastly, evolving at level 25. Haunter evolves into Gengar by trade. 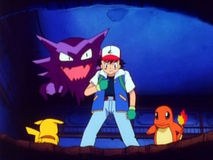 Ash Ketchum convinced a Haunter to follow him in order to defeat Sabrina. In his second battle, Haunter caused Sabrina to laugh with its constant pranks. After this, Sabrina gave Ash the Marsh Badge, and Haunter was given to Sabrina.