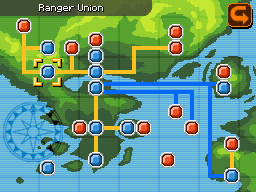 Haruba Village is a location in the Almia region. Near Haruba Village is the Haruba Desert, which is where Hippowdon lives and Hippowdon Temple with the Yellow Gem is located. The house desgins in Haruba Village are similar to an Indian house with no doors. When the main character first visits the place, a man has mistaken a Gigaremo as a cappucino machine. The character will quickly destroys the machine, making the hypnotized Pokémon awaken from their mind control. Haruba Village is also known for being required to pass through before being able to access the Capture Arena.