From the Azurilland Wiki, a database for the Pokémon series that anyone can contribute to
Jump to: navigation, search
← Kyogre | Groudon | Rayquaza →

Groudon does not evolve.

In Pokémon Mystery Dungeon: Red Rescue Team/Blue Rescue Team, Groudon appears as one of the main villains. After the hero, the partner, and the Alakazam's Team discovered the truth about Ninetale"s Legend, he causes a earthquake, later in the game, the hero and the partner have to go to the deep of Magma Cavern to save Alakazam`s Team, defeating Groudon. After his defeat, he can be recruitable to the Rescue Team.

He has a minor appearance in the next game, when he appears as an illusion created by Uxie. It is one of the heaviest Pokémon, as can be observed in the RSE Pokédex.

Groudon had a fight with Kyogre at the place where Kyogre slept. Groudon appeared in the Pokémon Anime in Gaining Groudon!, and The Scuffle Of Legends!, debuting with Kyogre as well. 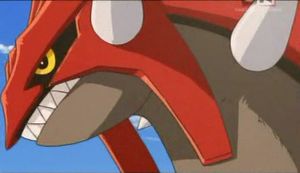 Team Magma and Team Aqua were competing to gain both legendaries. Team Aqua, as it turned out, tricked Magma leader Maxie by taking Kyogre even after they had Groudon. Ash's Pikachu then shocked Groudon's cargo container and released it to fight against a rampaging Kyogre.

A false one also appeared in the 6th Pokémon Movie, Jirachi: Wish Maker which a Team Magma scientist tried to create, but the experiment failed ending in a massive Groudon-like monster.

In Pokémon Rumble Blast, Groudon can be encountered if the launch pad leading to the boss fight is shining, but only if the main story has been finished. There is roughly a 5% chance of the "!" launch pad shining.

Groudon's name originated from the words "Ground" and "Geddon". Geddon's meaning being to crack the ground.